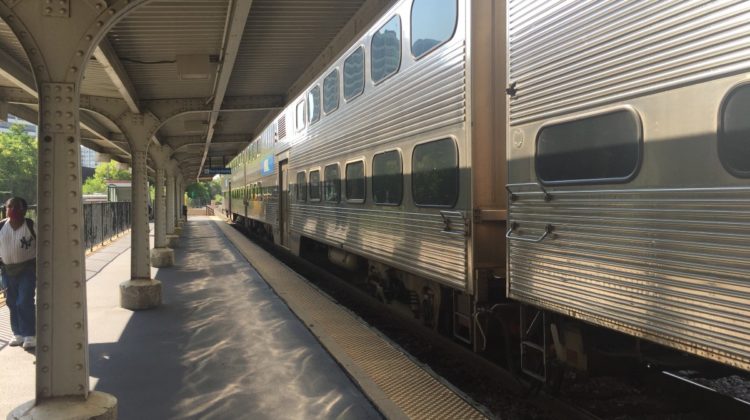 A Metra train at Davis Street.

Metra wants you back. The Chicago area rail commuter system, with three stations in Evanston at Main, Davis and Central streets, launched an ad campaign today aimed at convincing former passengers and potential future riders that its trains are safe during the COVID-19 pandemic.

At a morning news conference at a Chicago rail yard, Metra CEO Jim Derwinski said, “We can’t make COVID-19 go away, but we can help riders feel confident” that the trains are clean.

Currently Metra is carrying 25,000 people per day, only about 10% of the system’s pre-pandemic passenger load on its 242-station system.

Evanston is a perfect example. If you add up all three stations in town, Evanston is the busiest city on Metra’s Union Pacific North line. Now, however, traffic is close to nonexistent. Take train number 320, for instance, leaving Davis Street at 8:14 a.m., in perfect time to get downtown for a day’s work at the office.

Before the pandemic, that train averaged 112 boarding passengers on weekdays. This morning, eight people got on.

The “My Metra” campaign, with TV and radio spots, billboards and social media postings, talks of “commuting with confidence.” The ads highlight the daily cleaning, disinfecting and sanitizing of Metra’s train cars, along with the rule that everyone wears a mask. Social distancing is required — with one passenger per seat. Air is recirculated every four minutes. Each car has hand sanitizer too.

But even if passengers do feel safe on the train, until there is a coronavirus vaccine, many workers will continue working remotely from home, which might continue once the pandemic has passed. Derwinski said the rail system is aware of that. “We understand everyone is not going to go to the Central Business District,” he said. “But they may go two or three days a week,” so Metra has to be ready.

Metra is facing an additional challenge on the UP North line through Evanston, and its two other Union Pacific commuter routes as well. UP is telling its conductors not to punch tickets or sell cash fares on board. The railroad says concern over COVID-19 is the reason to limit personal contact between train crews and passengers. Metra says the loss of such ticket revenue on the UP lines is costing the agency $1 million per month.

But on Metra’s other lines, tickets are being sold and collected on board as usual. Those conductors and trainmen are either employed by the Burlington Northern Santa Fe on its Metra route, or by Metra itself on seven other lines.

UP and Metra are currently in a court fight over who will employ train crews on the UP lines. Currently Metra finances the service but UP operates it. UP says the conductors and engineers should work for Metra. Metra is not necessarily opposed to that, but is balking at the railroad’s proposed terms.

UP denies its no-selliing-tickets policy is an effort to pressure Metra in the legal battle. Spokesperson Kristen South says the “the safety of Chicago commuters and Union Pacific employees is paramount” in making decisions. Metra spokesperson Mike Gillis says the agency is “not going to speculate” about UP’s motives, and takes the company’s word that they are acting “out of concern for COVID.”

But whatever the motive, each ticket not sold is another financial hit for an agency which desperately needs cash. Metra is projecting a $682 million dollar deficit through the end of next year. Federal CARES act funding will cover about two-thirds of that, but come mid-2021, Derwinski says, “Clearly we will need more money” from the federal government.

Metra is not predicting what will happen if the money runs out, but in New York, for example, the nation’s largest transit system is projecting a 40% cut in subway and bus service without federal aid

Transit is a vital part of any metropolitan area. Whenever downtown business recovers, putting thousands of workers on the highway instead of on the train would cause gridlock of epic proportions.

Trains are safer and cause far less air pollution than cars. “We were green before green was invented,” Derwinski said. But right now, Metra’s biggest problem is the lack of another kind of green — money.