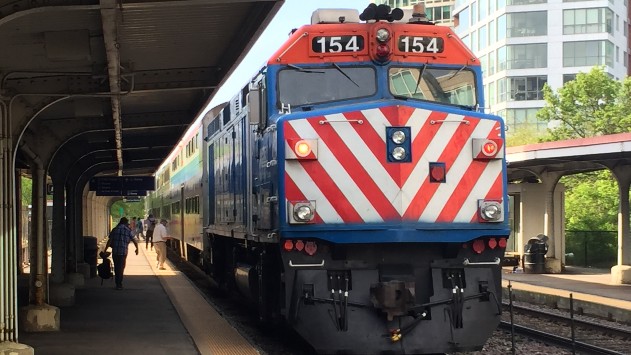 A Metra locomotive at the Davis Street station.

Metra, the regional commuter rail service, is asking a federal agency for an order against Union Pacific, the railroad that runs Metra’s trains through Evanston and many other suburban communities.

In a news release Metra said it wants the Surface Transportation Board to issue a preliminary injunction “to prevent the Union Pacific Railroad from taking planned steps that would degrade or halt commuter service on its three lines in the Metra system.”

Union Pacific owns the tracks, stations, employs the crews, and maintains the trains. Metra pays UP for those services, about $100 million last year.

The debate centers on whether the Union Pacific has a legal obligation to provide commuter service, under something called the “common carrier” doctrine.  Metra says UP does. UP says it does not.  In December, the railroad asked a federal court to decide the question. Metra wants the STB to rule instead, saying that agency has expertise in railroads.

While this may seem like just legal jousting between a public agency and a private company, a lot is at stake. Before the coronavirus pandemic, the three UP lines, including the North line through Evanston, carried 45,000 daily commuters.

According to Metra, UP told the agency “it intends to halt a variety of functions,” including maintenance of cars and locomotives. Metra also claims UP says “it intends to discontinue service” within 90 days if it wins the federal court case.

The railroad, however, says train services “will not change,” although the railroad does want a change in who operates the service.

In an email to Evanston Now, spokesperson Kristen South said, “We have been clear with Metra that commuter trains will continue to run on these lines and service will not be halted.” But UP wants Metra to employ the train crews. Metra says that’s not as easy as it sounds, due to various union and real estate questions.

The two sides have been negotiating unsuccessfully for a year. Depending on what ruling comes from what agency or court, it could then force the two sides to find a way to settle the dispute.

Metra ridership has plummeted since mid-March when the coronavirus pandemic forced shutdown of most area businesses.The number of passengers has been increasingly slowly, but the three UP lines are still only carrying about 9,000 riders a day.