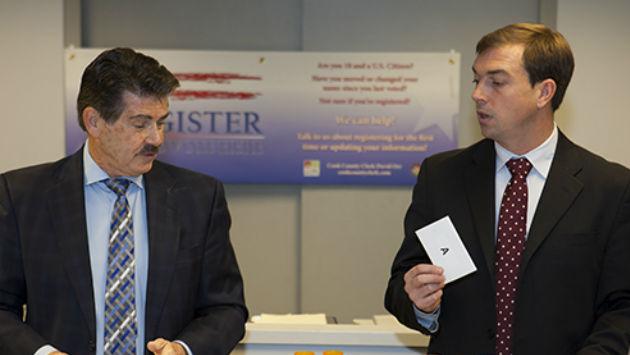 The names of Mark Metz and Jennifer Phillips will be at the top of the ballot when Evanston school board elections are held in April.

They were winners of a lottery held Monday by Cook County Clerk David Orr, assisted by Director of Elections Noah Praetz, to determine ballot positions for candidates in 74 contests in the county that were in line to file their nominating papers at 8 a.m. on the first day of filing or in the last hour of the filing period.

Metz and Jonathan Baum, both incumbents running for an additional four-year-term on the Evanston Township High School District 202 Board, were among the early filers on Dec. 15.

Similarly, Phillips and incumbent Omar Brown were first to file for four-year terms on the Evanston/Skokie District 65 School Board.

The remaining candidates will be listed in the order that they filed their papers to qualify for the election.

The District 65 ballot, headed by Phillips and Brown, will list, in order, Dortch (who is a candidate in both elections) and incumbent Richard Rykhus.

The ballot lottery is held because of the perception, backed up by actual statistics, that being at the top or the bottom of the list gives those candidates an edge in the voting, particularly when a large number of candidates are on the ballot.

Top: Orr and Praetz conduct the lottery in downtown Chicago.

Contested elections for both school boards