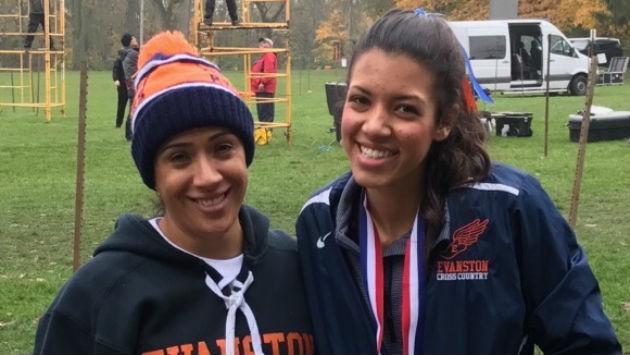 Enyaeva Michelin stepped out of her comfort zone — and into the record book — Saturday afternoon at Detweiller Park in Peoria.

Michelin’s all-out challenge of defending Class 3A cross country champion Katelynn Hart of Glenbard West produced the best finish in the history of the Evanston Township girls program on a dreary afternoon in Peoria.

Michelin claimed runnerup honors, only eight seconds behind champion Hart, with a time of 16 minutes, 30 seconds on a soggy course. She joins Stephanie Goodrich — 10th in 1991 — as the only ETHS female runners to score a top 10 finish in the history of the Illinois High School Association state final meet, dating back to 1979.

Michelin’s 2nd place time was actually one second faster than the time posted by Hart when she won the title as a freshman last fall. Saturday, the ETHS senior  stayed on the seemingly invincible Hart’s shoulder for two-thirds of the race, a fact noted often by the public address announcer giving a play-by-play to fans in attendance.

Hart’s closest win prior to Saturday’s showdown with Michelin was by a 22-second margin. But Michelin approached the daunting task of trying to catch the Glenbard West standout with a determined effort right out of the starting box.

“I knew I’d be in good shape at the finish if I could stay with her for 2 or 2 and a half miles,” Michelin said. “There were two strategies I could have used today. I could try to stay with her right from the start, or I could run with the pack (behind her). Running with the pack would have been more comfortable, but I really wanted to solidify 2nd place, so I ran outside my comfort zone.

“It feels so good and I’m so happy! The key for me today was to stay relaxed and this race felt just like any other meet because of that. I’ll probably get some flak from my coaches, but my 5th 800 (in a 3-mile race) is usually my weakest and that’s where she pulled away from me a little. But I left it all out there on my last 800, and my No. 1 goal today was to leave it all out there so I could leave here proud of my race.”

“It was an amazing performance by Enyaeva,” said Evanston head coach Rosette Ochoa. “It’s hard for me to put into words how proud I am of her. She took a calculated risk today, and there are no regrets. What she did today will help her grow as an athlete. And once you get the taste of winning that she’s had (in track), it’s hard to sit back against anybody.

“She’s a unique athlete, and she did what worked for her today.”

Evanston’s other state finalist — senior Joey Eovaldi — placed 157th in the boys field with a time of 15:51.

Michelin’s stunning ascent to join the elite ranks of distance runners in the state of Illinois was remarkable in many ways. She placed 117th at State as a junior and ran two full minutes slower, bothered by a bad case of shin splints, in her first appearance at the finals.

Veteran observers couldn’t recall anyone making that kind of individual progress from one year to the next, by either time or place. If the IHSA awarded a medal for “Most Improved” in the state, Michelin would have been the obvious selection.

Her climb to near the top of the distance class didn’t follow the career path taken by most successful distance runners. Probably 90 percent of them began their running careers as 2 milers and milers — with extensive mileage run in the summer months to build stamina — and then had their medalist moments dropping down in distances for competition during the spring track season.

Michelin? After failing to land a spot on the school’s Pom Kits squad, she did run cross country as a freshman. But her real forte was at 800 meters during track competition, and later she moved up to the 1600.

Her breakthrough at the 3-mile distance didn’t come until her senior year — in a big way.

“I didn’t do it the traditional way, and I didn’t expect to have this much success in cross country,” said Michelin prior to the race. “It was a reach up for me. Getting through the first half of the race was always the hardest part.”

Michelin worked diligently with assistant track coach Jesse Sibert in the summers, winning a national age group championship at 1500 meters in August and somehow finding a way to carry over that success to the fall grind. Her only losses this year — 3 of them — came in head-to-head competition with Hart.

The ETHS senior, who has committed to the University of North Carolina, placed 7th in the state last May in the 800 and also qualified for the 1600 before dropping out to focus on the shorter race.

“I think a lot of Enyaeva’s success revolves around Coach Sibert, even though it was a collaborative effort (between the cross country and track coaching staffs),” said ETHS head track coach Fenny Gunter. “He moved up her distance workouts, and it’s really not as complex as it seems. She was just trying to run 5 minute splits for one more mile. But not many girls have done it that way. Enyaeva can run a variety of distances, and you just don’t get a girl with a wide range like that very often.

“When she opened up her mind and started listening to what Coach Sibert had to say, she really started to grow by leaps and bounds.  Most people don’t do it the way she did it, but who’s to say what’s the best way to succeed?”

“I had a little girl (Michelle Giampapa) who did it the same way when I was at Lane Tech,” Sibert said. “She ended up being the first girl from the city to become All-State down at Peoria (18th place in 1983). It worked then, and it’s a lot of work to get where you want to go. We took Enyaeva’s speed and then it was just a matter of putting in the mileage. She did more work in the off-season, but I didn’t think she’d drop time like she did.

“When she ran a 17:20 the first time out this year I said ‘uh-oh, something good is gonna happen here.’ If a girl like Enyaeva gets the right training, she’s able to hold her ground and still have something left in a 3-mile race.”

While Michelin’s rise was one of the most dramatic the sport has seen in Illinois, Eovaldi’s steady progress on his way to becoming the first ETHS male runner to reach Peoria since Matt Marol in 2008 was also significant. After all, Eovaldi was only regarded as the No. 8 freshman runner in his ETHS class when he began his racing career.  But he never stopped improving.

Saturday, he admitted he latched on to a group of runners that were too quick for him. The result was a clocking of 15:51, far short of his goal of 15 minutes flat.

“If I had this race to run over again, I wouldn’t try to run with someone who was 20 seconds faster than me (coming into the race),” Eovaldi said. “I went out with some fast people and I shouldn’t have done that against this kind of competition.

“It’s really difficult to run your own race once you get down here. Usually I can talk to myself and pick myself up — it happens 6 or 7 times in most races — but it didn’t happen today. I got into my own head a little too much and I didn’t run a great race.

“But I’m really thankful that I was able to get down here and it was a great experience. I know it sounds a little cheesy, but even when I was the No. 8 freshman I still had a goal to go Downstate from the first day I joined the team. I was able to keep that mentality, and that was the key for me.”