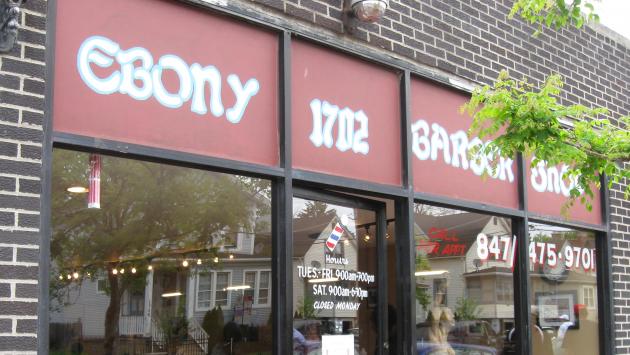 A system of lending to business that has become popular in underdeveloped countries has successfully been implemented in Evanston, thanks to a group of student volunteers at Northwestern University.

On Saturday, the owner of Ebony Barbershop, located a half-block from the high school at 1702 Dodge Ave., made her final payment on a loan made 18 months ago by a student group on campus known as Lending for Evanston and Northwestern Development (LEND).

Also on Saturday, the group made two more loans to Evanston entrepreneurs.

Microfinance loans are typically small—in the $500 to $5,000 range—a denomination that few commercial banks are willing to bother with. But they often make the difference between success and failure for some small businesses. 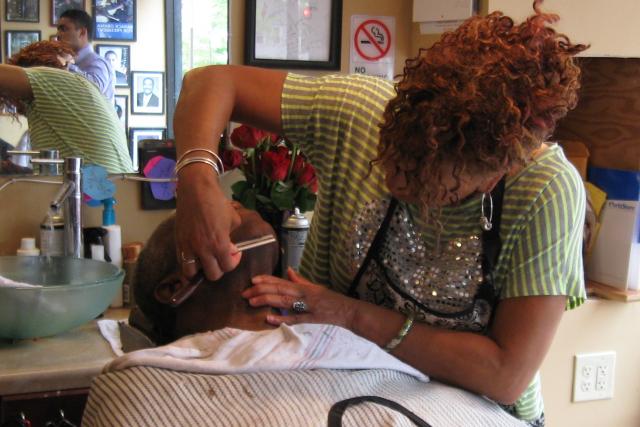 Ebony owner Gigi Giles goes to work on a customer with a straight razor.

In the case of Brigette “Gigi” Giles, Ebony’s owner, “our basic business training services have fundamentally changed the trajectory of Gigi’s business and given it momentum for continued growth,” said LEND’s president, Gaurav Kikani.

After inheriting the salon from her father, Giles realized the business was in need of a serious overhaul, both financially and aesthetically. With the loan, she’s been able to renovate her entire shop and attract new business.

One of LEND’s new clients, Sara Jane Abbott, is opening a jewelry boutique store, SeeJaneSparkle, at 817 Chicago Ave. Their other new client, Randy Nelson, is using his loan to purchase a vehicle for his contracting business.

Along with the loan comes frequent personal service from the LEND volunteers on campus.

LEND account managers met with Giles every week or two, not just to receive updates on cash flow and the repayment schedule, but also to help her navigate the marketing, bookkeeping, and business modeling for the barbershop.

As a not-for-profit organization, LEND’s funding comes primarily from charitable donations from private individuals. No taxpayer money is involved, according to the students.

The history and mission of the organization is detailed on its website: “LEND was started in February 2010 by several Northwestern undergraduates concerned with the state of the Evanston economy and the lack of connection between university students and their neighbors.

"With the support of the Northwestern Associated Student Government and several faculty and alumni, LEND began offering workshops and loans in May 2010. LEND launched an extended three-month business training program in October 2010, which has now transitioned into a full-fledged, personalized business training service.”