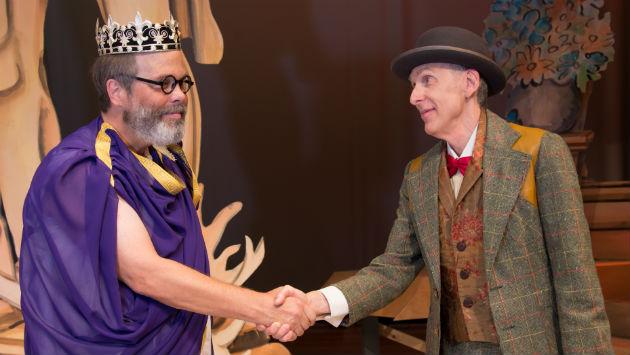 The Savoyaires production of "Thespis" opens this weekend directed by Dominic Missimi, a two-time Jeff Award winner and 17-time Jeff nominee for best director of a musical.

Gilbert & Sullivan’s “lost” operetta, also known as "The Gods Grown Old," will have its fourth Chicago-area production using Kingsley Day’s critically acclaimed score, and Day himself will make his 17th and last Savoyaires stage appearance in the title role.

Missimi has directed for such companies as Chicago Shakespeare Theater, Chicago Opera Theater, and Drury Lane Theater, in addition to 36 productions — including Gilbert & Sullivan’s Pirates of Penzance — at the Marriott Theater in Lincolnshire.

The very first of Gilbert & Sullivan’s 14 collaborations, Thespis is rarely performed because most of Sullivan’s original music is lost. Kingsley Day’s Thespis score — previously performed by Pary Productions at Stage 773 in 1982, by the Chicago Gilbert & Sullivan Series in 1983, and by the Savoyaires in 2004 — has been hailed by critics as “an inspired substitute in the Sullivan style” (Howard Reich, Chicago Tribune), “as exhilarating as if the music had been recovered” (Lawrence Bommer, Chicago Reader), “music that would do credit to the master himself” (Richard Christiansen, Chicago Tribune), and “first-rate, with the proper Sullivan bounce, lilt, and personality” (critic Jonathan Abarbanel).

The Savoyaires’ 2004 production premiered the score’s orchestration by Francis Lynch, Daniel Robinson, and Day. Playing the title role this fall, Day is appearing for the first time in Thespis and for the last time with the Savoyaires, where as of this production he will have played the patter baritone lead in all 14 Gilbert & Sullivan operettas.

In Gilbert’s hilarious Thespis script, the gods on Mount Olympus have grown old and tired. To find out what they’ve been missing, they go down to earth incognito, leaving a troupe of actor — led by Thespis — to run the world in their absence.

Naturally, topsy-turvydom ensues. The score includes “Climbing Over Rocky Mountain,” a number that G & S recycled in Pirates of Penzance, here sung as originally conceived—by full mixed chorus, rather than only women as in Pirates.

This fall’s show will be the Savoyaires’ 52nd annual Gilbert & Sullivan production and the company’s third production of Thespis. In addition to performing Day’s version in 2004, the Savoyaires produced company cofounder Frank Miller’s score in 1973.