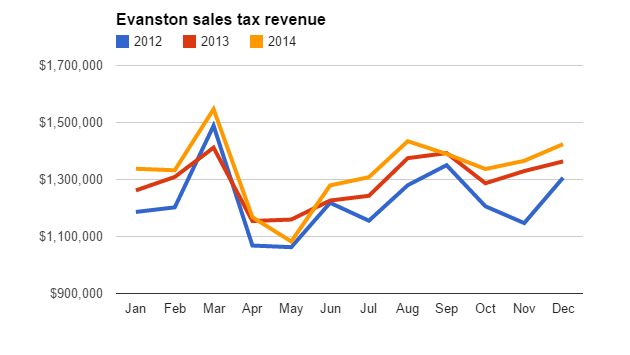 Sales tax revenue in Evanston grew less than the statewide average in 2014 but spending on new construction projects increased from the year before.

Figures from the Illinois Department of Revenue show a 3.17 percent increase in sales tax revenue in Evanston, while for local governments across the state the average increase was 3.47 percent.

That reversed the pattern from 2013, when Evanston's sales tax revenue increased 5.74 percent from the previous year, dramatically outpacing the 1.13 percent increase recorded statewide.

Comparing figures from 2013 and 2014 annual reports issued by the city's Economic Development Department, the picture is also mixed.

Despite the mixed data, the 2014 city report summary was relentlessly upbeat, calling 2014 "a great year" and claiming "Evanston is poised to keep this momentum going in 2015."