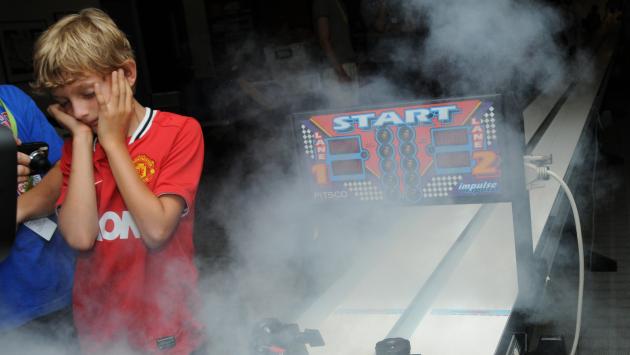 Gifted students in a summer engineering program at Northwestern University raced their model cars Wednesday on an 80-foot track in the basement of the Sheil Catholic Center on the university’s Evanston campus in a test of Newton’s Third Law of Motion.

That’s the one that says for every action there is an equal and opposite reaction.

They were also testing another theory that says that force equals mass times acceleration.

At any rate, to a casual observer, the race pitted two model cars, powered by tiny capsules of compressed carbon dioxide, zipping along parallel tracks at speeds calculated to the thousandth of a second.  Most of the cars traversed the 80 feet in less than two seconds.

The class consists of 20 students who recently completed studies in the fourth through sixth grades from schools around the country and as far away as Taiwan. Those who live outside the immediate area lived in dorms at Northwestern for the duration of the three-week program, which ends Friday.

Principal instructor in the class is James Depies, a physics teacher at Maine South High School in Park Ridge.

The class, “Designing Machines That Work: Engineering and Physics” is one of some 120 classes totaling more than 4,000 students offered in the summer program of Northwestern’s Center for Talent Development.

The classes are from one to three weeks in length and are offered on campuses in Evanston, Chicago, Elmhurst, Naperville, Palatine, and Skokie.

The summer program, for gifted students in the top percentiles of academic achievement, allows participants to pursue subjects in math, science, engineering, English, humanities, and social sciences, with hands-on experiences that challenge them to excel further.