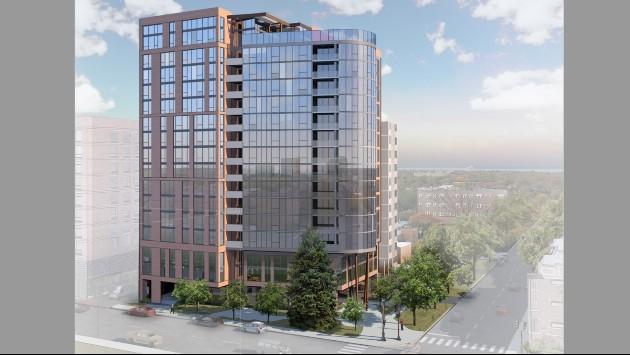 “Things look very positive” for a new, mixed-income housing tower in Evanston. That word today from the executive director of the Housing Authority of Cook County, Richard Monocchio.

Monocchio told Evanston Now his agency submitted a zoning application to the city this week for the 16-story structure, to be built on what is now a parking lot next to the Housing Authority’s Jane Perlman building at 1900 Sherman Avenue.

Perlman is for low-income senior citizens and individuals with disabilities. The new structure would be part market-rate housing, part “affordable” housing, and part housing for people in what’s called the “missing middle” income bracket.

Monocchio said there would be 50 “affordable” units out of a total of 168.  In previous submissions:

Monocchio described the proposed building as “a huge asset. There’s been lots of growth,” he explained, “but not enough affordable housing.”

He also said paying for the building would be “unique.” The Housing Authority already owns the site. There will be a partnership between the Authority and the private John Buck Company for the $55-$60 million dollar project. The exact equity split, who pays how much, is still subject to negotiation. However Monocchio said the financing is “unheard of” for a building like this, where construction is usually 100 percent government subsidized.

There are still several steps before the building becomes a reality, including approval by City Council. However, Monocchio said “city officials are totally positive.” The goal for groundbreaking is the first quarter of 2021.