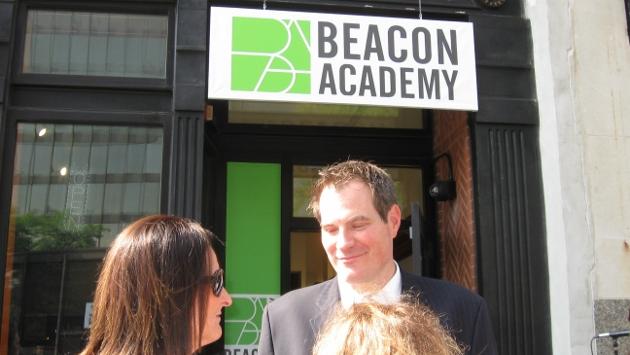 Beacon Academy, the Chicago area’s first Montessori-based high school, opened its doors Monday to 37 ninth and tenth graders, most from outside of Evanston.

Jeff Bell, Head of School, welcomed Evanston Mayor Elizabeth Tisdahl and 4th Ward Ald. Donald Wilson to a ribbon-cutting ceremony on the sidewalk outside the school’s entrance at 622 Davis St., as students, parents, and well-wishers gathered to watch.

Some 43 percent of the academy’s students live in Chicago,11 percent live in the west and northwest suburbs, and the remaining 46 percent live on the North Shore, including Evanston.

More than half come from Catholic schools and other independent schools or have been home-schooled, according to the school’s website, while 30 percent come from Montessori schools and 16 percent from public schools.

The academy “offers an innovative and challenging education based on Montessori principles that places a priority on experiential learning, entrepreneurial thinking, and in-depth interdisciplinary studies,” according to its website.

Top: Bell chats with well-wishers at the academy's grand opening on Davis Street.