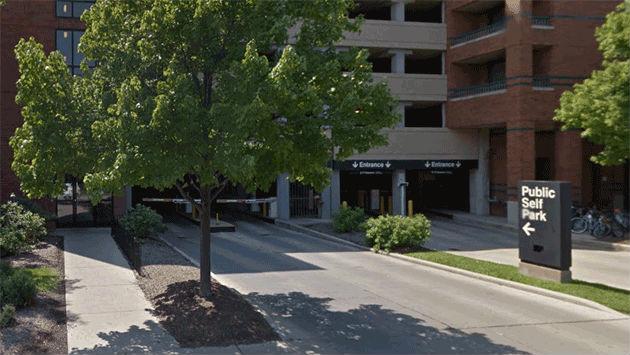 Nearly a year after first voting in favor of the idea, Evanston's Transportation and Parking Committee voted Wednesday to delay action on a plan to lease spaces in the Church Street garage to Northwestern University.

Had the lease been approved a year ago, the city would have earned over $100,000 in revenue by now from the deal.

The garage has 600 spaces available to the public, and city officials say that at peak occupancy around 2 p.m. on weekdays, it's now only 61 percent full.

Leasing 100 spaces to the university would raise that peak occupancy level to 78 percent.

Alderman Judy Fiske, whose 1st Ward includes the garage, led efforts to delay the deal last year. And at Wednesday's meeting she raised a variety of fears about possible overcrowding at the garage.

She noted that a bike lane along Chicago Avenue that's scheduled to be built in 2017 will eliminate about 52 on-street parking spaces. And she said that if the library parking lot on Chicago Avenue is redeveloped, the 72 spaces there would be lost, at least while the project is under construction.

No development plans have been submitted for that site, however.

Peak afternoon occupancy levels at the garage have grown at an average rate of 2.7 percent over the past six years, according to a staff memo presented to the committee.

Assistant City Manager Marty Lyons said the university has indicated it would like to use the leased space for a mix of parking for school employees who work near the garage and for the families of prospective students visiting campus.

There was no discussion at the meeting of how many of those people may already be parking in the garage or in the immediate area around the garage now and therefore what the net impact of the lease on parking demand would be.

Committee member Hugh Bartling asked whether there's an industry standard or target for optimum parking garage occupancy levels. "What's the sweet spot," Bartling asked? "The garage cost a lot to build and we want to have full utilization of it."

Lyons said, "We haven't had to have that discussion, because in the past we've never come close to full occupancy."

But he added that the city's Sherman Plaza garage is now full at peak hours for the first time.

The latest version of the lease plan came to the committee as a proposed three year deal for either 50, 75 or 100 spaces. The committee asked Lyons to go back to the university and propose instead a renewable one-year agreement with a 90-day cancellation provision.