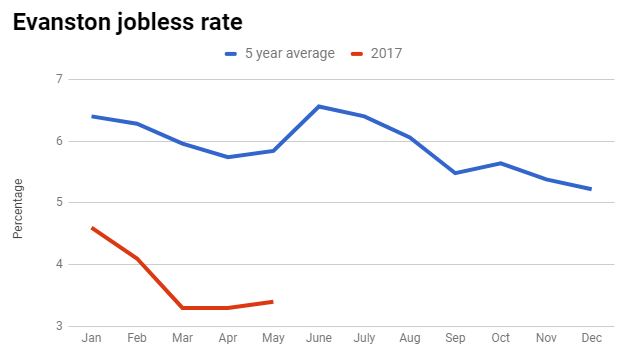 The number of Evanstonians with jobs increased by 417 in May compared to the month before, but the jobless rate still inched up by 0.1 percent because even more people started looking for work.

Figures released this noon by the Illinois Department of Employment Security show 63 more people in Evanston were looking for work last month who couldn’t find it, raising the number listed as unemployed to 1,344 — or 3.4 percent of the city’s workforce.

The Chicago metro unemployment rate dropped 0.1 percent in May, from 4.2 percent to 4.1 percent. Metro-wide the number of people finding work grew a little faster than the growth in the labor force. A year ago the metro jobless rate was 5.3 percent.

Twenty-five of the 107 Illinois communities withe more than 25,000 residents had jobless rates lower than Evanston’s in May. That was up from 18 in April.

The state’s lowest jobless rate in May was 2.9 percent in Wilmette. Mount Prospect was among three towns at 3.0 percent. Glenview and Northbrook were among four at 3.1 percent. Arlington Heights and Highland Park were among six towns at 3.2 percent. And Naperville and Schaumburg were among 11 towns at 3.3 percent.

The jobless rates in Skokie and Oak Park were just a shade higher than Evanston’s at 3.5 percent