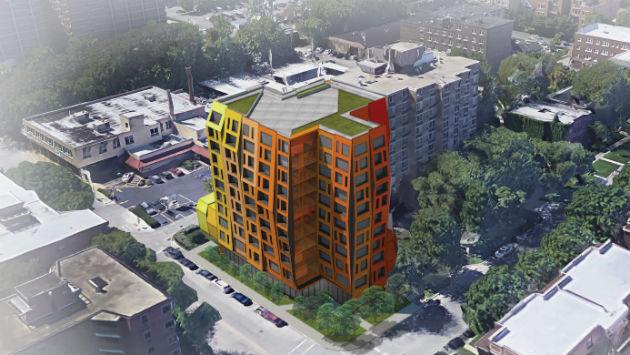 Representatives of the Housing Authority of Cook County presented preliminary plans for an addition to its Perlman Apartments development at 1900 Sherman Ave. at an Evanston 1st Ward meeting Tuesday night.

Alesia Hushaw from the housing authority said the plans call for an 11-story structure to be constructed on what’s now a surface parking lot for the Perlman building at the northwest corner of Sherman Avenue and Emerson Street.

The parking lot site, in a recent image from Google Maps.

She said the building would contain parking for 40 cars, up from 22 in the open lot now, and would include 80 apartment units as well as ground floor retail space facing Emerson.

Architect Juan Moreno said the new apartments would range in size from 600 to 900 square feet, larger than the units in the existing Perlman building, which has 110 units.

Parking for the new building would be reached through the Perlman buiding’s existing south driveway on Sherman Avenue, which would be widened to handle two-way traffic.

Sarah Flax, Evanston’s housing and grants administrator, said the housing authority, in addition to its Perlman and Walchirk apartment buildings in Evanston, also operates 45 units of scattered site housing in the city and provides 575 families with housing choice vouchers.

Flax said the new plans represent an exciting opportunity to provide needed affordable housing near downtown. Waiting lists for both the Perlman and Walchirk developments are currently closed.

The new HACC building would be located just east of the nine-story 811 Emerson residential development that’s now under construction on the site of a former drycleaning plant.

One resident of the Sherman Gardens co-op complex on the south side of Emerson claimed that the new developments would create “a flood zone” on the street, but Moreno said new building would have a permeable roof.

The city has requirements for water detention on development sites, the architect said, and this building would more than meet those requirements.

Community Development Director Johanna Leonard said the HACC proposal hasn’t yet reached the initial zoning analysis stage of the city’s review process, so no other public meetings about the development have been scheduled yet.