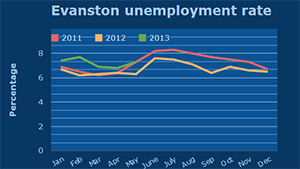 More workers found jobs in Evanston in May, but the unemployment rate jumped as even more people started looking for work.

Figures from the Illinois Department of Employment Security show 425 more people had jobs in May than in April, but an additional 227 people were looking for work but couldn't find it.

The jobless rate for the tri-state Chicago metro region was unchanged in May at 9.1 percent.

And the statewide rate also was unchanged at 8.7 percent.

Twenty-six of the nearly 100 towns in Illinois with more than 25,000 residents had lower unemployment rates than Evanston in May. That number was up from 20 in April.

Highland Park had the lowest jobless rate at 5.7 percent. followed by Vernon Hills at 6.0 percent and  Qunicy at 6.1 percent.