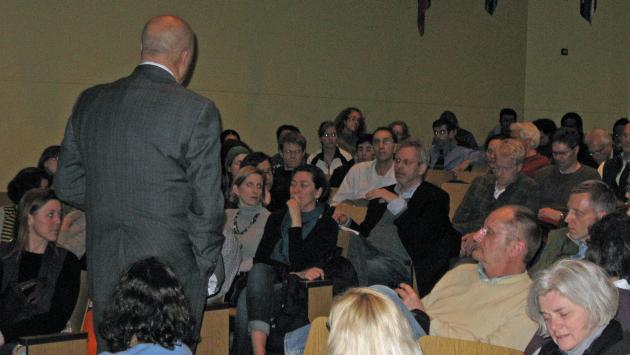 School Superintendent Hardy Murphy attempted to explain to parents Wednesday night why he relieved Dewey School's principal of his command after nearly 13 years on the job.

There were few empty seats in the Dewey Elementary School auditorium Wednesday night as Evanston/Skokie School District 65 Superintendent Hardy Murphy, constrained by legal counsel, attempted to explain to concerned parents why he relieved the school's principal of his command after nearly 13 years on the job.

When the superintendent finished his opening statement and asked for questions, there were murmurs of “why?” and “what did he do?”

Those questions remained largely unanswered nearly 90 minutes later when the meeting broke up and many parents expressed puzzlement about how they could explain the situation to their children who attend the school in Central Evanston.

All they knew for sure was that Principal Andrew Krugly had been absent for the past several weeks and had been offered a job of an undisclosed nature at the district’s central office while his post at Dewey School would be filled for the remainder of the school year by Patricia Mitchell, described by Murphy as “a veteran District 65 principal who is no stranger to the Dewey community.”

Murphy apologized to the parents for being unable to disclose the entire story because of advice from legal counsel on such a sensitive personnel matter, but he said it all started about a month ago, when “we heard he was ill. As time went on, it became obvious that he would not be coming back anytime soon.”

There was a series of allegations from Dewey staff members, Murphy said, “that told us there was a need for administrative intervention.”  Murphy declined to say what Mr. Krugly’s duties would be at district headquarters, but said “it is not a promotion” and that “he (Krugly) did not have a choice” about the reassignment.

Krugly, who was not available for comment, said in a letter distributed to the parents that he was “very sad to be leaving, as Dewey School has been a huge part of my life and my second family for almost 13 years, but the time has come for me to move on. Dr. Murphy is providing me with an opportunity to become part of the central office staff…and hopefully this new position will allow me to use the best part of my skills.”

As far as rumors about his health, Krugly said that part of his absence “was to obtain some medical assistance and to recover. Beyond that I would very much like to keep it both personal and private. I am on the mend.”

He acknowledged there are lot of rumors and accusations flying around right now, but he cautioned the Dewey community that “just because accusations are made does not mean that they are true.”

When asked if a grievance had been filed, Murphy paused a few seconds and then said, ”an official concern was registered with us and that concern came through the union.”

Murphy assured the parents that a search for a new principal has already begun and that he hoped to have a permanent replacement by the end of this school year.

“If the kids want to know why their principal is not returning,” he advised, “tell them the truth…Mr. Krugly took another job. You can talk to them about how lucky they are that Mrs. Mitchell was able to come back to Dewey School to help out.”

Above: Superintendent Murphy, back to camera, speaks to Dewey parents.