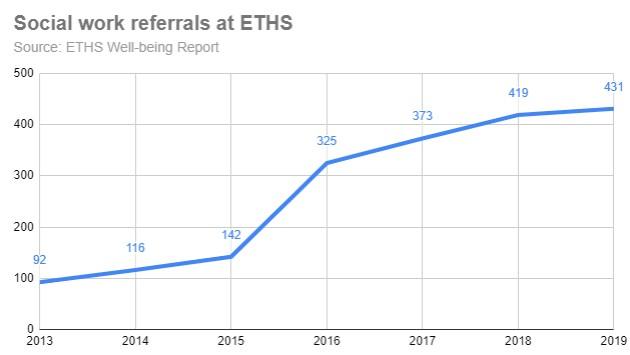 According to the Well-being Report, the number of referrals of students for social work increased from 92 in 2013 to 431 in 2019 or 368%, far greater than the 18% increase in enrollment over the same period.

“Students are experiencing stressors and are accessing mental health supports” at the school, with families or within the community, said Taya Kinzie, associate principal for student services.

In a well-being survey administered last spring, 37% of students reported feeling anxiety or stress that impacted their ability to deal with daily activities for six or more of the previous 30 days.

Over one quarter of students (26.2%) reported feeling sad or hopeless most days for two weeks or more in a row that resulted in stopping doing some usual activities in the last 12 months.

More than half of students (55%) reported seeing a mental health professional within the past year, either within ETHS or outside the school.

A study released last spring, based on data from the annual National Survey of Drug Use and Health showed the share of teens 12 to 17 reporting symptoms of a major depressive episode within the past year rose from 8.7 percent in 2005 to 13.2 percent in 2017.

Nearly one fourth of students who took the assessment (23%) were identified as needing follow-up and 149 students (16%) were referred for services as a result of the program, with 81 of that 149 recommended for a new service, reflecting identification of a new student need.

“Each staff member has a role in creating a sense of belonging through social emotional and academic learning, as well as connecting students to supports,” Kinzie said, with professional development for teachers focused on equity and prevention efforts as well as outreach to families.

The school has adopted a program called Acknowledge, Care Tell that encourages everyone, including students and staff, to recognize warning signs in others and tell adults about concerns. It has also created an online form for reporting bullying and harassment.

In another measure of student well-being, Kinzie said the 5Essentials Survey, administered by the University of Chicago, indicates that students feel safe and comfortable with teachers, believe teachers treat students with respect, and report that people at ETHS are friendly.

A survey of seniors showed that most felt prepared in relation to post high school planning and agreed that meetings with counselors were helpful.

Board member Patricia Maunsell wondered whether the reported increase in students’ depression and anxiety was related to an actual increase or an increase in awareness of mental health issues.

“Everyone including teachers is reaching out to students,” Kinzie said. “In part the jump is an increase in capacity as well as an increase in messaging. But student need is increasing. We’re seeing that nationwide.”

“Students are much more open about their needs and their willingness to acknowledge mental health issues,” said Superintendent Eric Witherspoon. “We live in a time when adults and young people are willing to say they need more help and know where to go for it.”