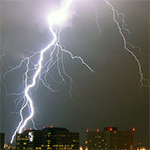 The National Weather Service has issued a flash flood watch for northern Illinois including Evanston through Wednesday evening with severe thunderstorms in the forecast for tonight.

Thunderstorms that may produce damaging winds of over 70 miles per hour, frequent lightning, hail to the size of quarters are in the forecast.

The storms are expected between late afternoon and evening, with another band of storms expected later in the night.

Because the ground is already saturated in many areas from yesterday's rainfall, there's a danger of flash flooding in the wake of the new storms.

About 200 ComEd customers in Evanston lost power in Monday night's storm and a handful are still reported to be without power this afternoon.