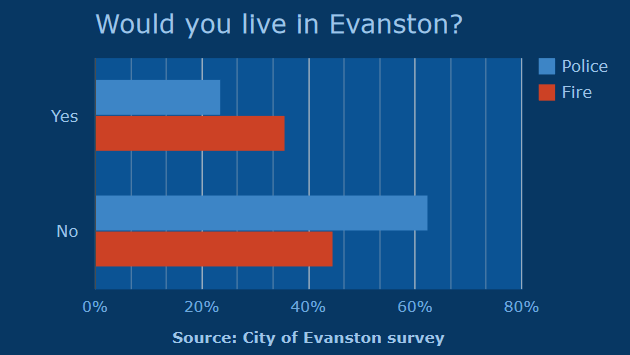 Most Evanston police and firefighters surveyed by city officials say they don’t want to live here.

Just 23.3 percent of police and 35.5 percent of firefighters responding said that — if they could — they would live in Evanston.

Overall, about one-third of city employees live in Evanston. City Manager Wally Bobkiewicz says 15 police officers, or about 7 percent of the force, live in the city. Eleven firefighters, or about 10 percent, live here.

Just under half the 224 police employees and 69 percent of the 110 firefighters took part in the survey.

Among the police, 62 percent said they would not live here. For firefighters the “no” percentage was 45 percent. The remainder of each group said they weren’t sure. 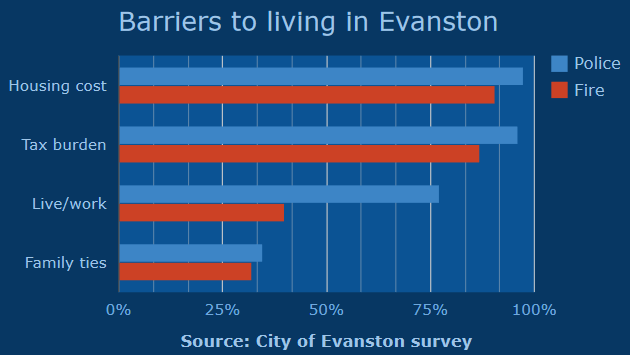 Given choices of issues that they thought created a “moderate” or “significant” barrier to living in Evanston, both groups saw housing costs and high taxes as big problems, and existing family ties to another community as much less of a problem.

In a separate question, a large majority of police officers responding said they didn’t want to live in the same community where they worked for fear they or their families might have unpleasant encounters with people they’d arrested.

In open-ended responses on that issue, some officers said that while a cop working in a large city like Chicago might be able to work in one neighborhood and live in another and not encounter offenders he’d dealt with on the job — that was not realistic in a smaller city like Evanston. 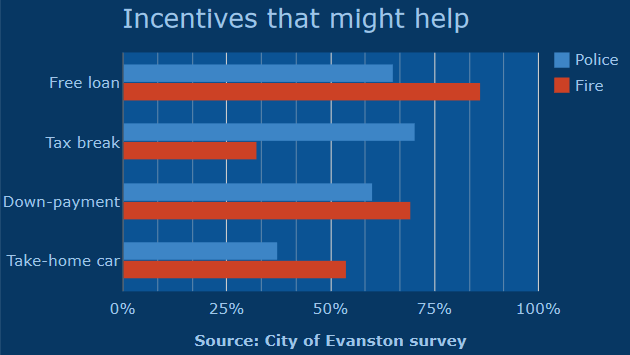 Asked about a range of possible incentives that might encourage them to choose to live in Evanston, no-interest loans and help with down payments were popular with both groups with majorities saying they would be a  “moderate” or “significant” incentive.

A reduction in property taxes proved popular among police and having a city-provided car they could take home was more popular among firefighters.

The survey results are scheduled to be presented to aldermen at tonight’s Rules Committee meeting. Aldermen requested the survey last fall during a discussion of ways to encourage more police to live here — a move supporters believed would make it easier to distinguish law-abiding residents from criminals.

Some officers responding to the survey criticized aldermen for their decision to apologize to a Northwestern University professor who objected to the brief detention of her 13-year-old son as a burglary suspect.

As one put it, “Aldemen should back us for the work we provide, rather than apologize to citizens prior to knowing all the facts.”

The professor has since filed suit against the city over the incident.