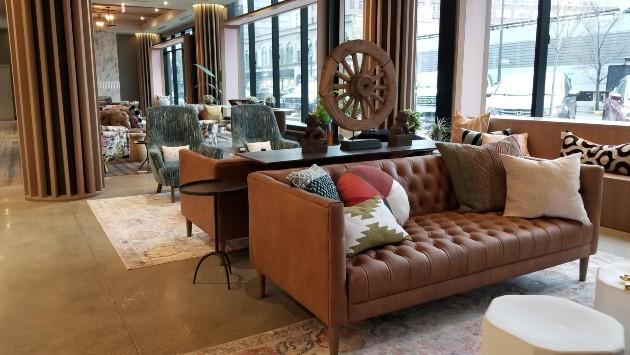 Albion Residential Vice President of Development Andrew Yule says the building has an unusually large lobby area with natural wood finishes blending with the structural concrete of the high-rise structure.

Albion President Jason Koehn adds that the lobby is designed to be open to the pubilc and provide a connection between the two commercial spaces at either end of the ground floor.

Koehn said Albion is in talks with potential tenants for both of the retail spaces, but no leases have yet been signed. Prairie Moon restaurant owner Robert Strom, Koehn says, has decided not to lease the restaurant space as had originally been contemplated when plans for the building were first announced.

Jason Koehn in a model apartment on the fifth floor.

Showing off a two-bedroom model apartment on the fifth floor, Koehn said, it has “steeple views” of several downtown churches.

The living room of the model apartment, with floor-to-ceiling windows, a feature of most units in the builiding.

On the fourth floor, atop the building’s parking garage, there’s a large outdoor area with a mix of amenity space for tenants and green planting areas designed to absorb much of the rain that falls on the building.

The 268-unit building has a mix of about 75 percent studio and one-bedroom apartments, with the rest two-bedroom units

Construction work continues, especially on upper floors of the building. Koehn says they hope to have all the work completed within the next two months.

Overcast skies and drizzle minimized the views from atop the building on opening day.

On the top floor, where there will be a swimming pool and a variety of other amenities for tenants, Koehn says that on a clear day there are dramatic views east to Lake Michigan, south to Chicago’s Loop and southwest about 25 miles to the tallest buildings in Oak Brook, Illinois.

The building has a key fob security system to access apartments as well as a package room with security cameras — and a refrigerator for food deliveries — to store the increasing number of parcels being delivered each day.

Residents of west-facing units will be able to track the passage of Metra and CTA trains.

He said that recent increases in commercial property taxes in Cook County and continued top-dollar expectations from would-be sellers of development sites make the prospects somewhat cloudy for additional developments here in Evanston or elsewhere in Cook County.

The exterior of the building, with its distinctive wave design to fit the irregularly shaped site.

Rent at the Albion Evanston starts at about $1,500 for a studio apartment. The development includes 15 affordable units, and move-ins for those tenants are expected to start next month.