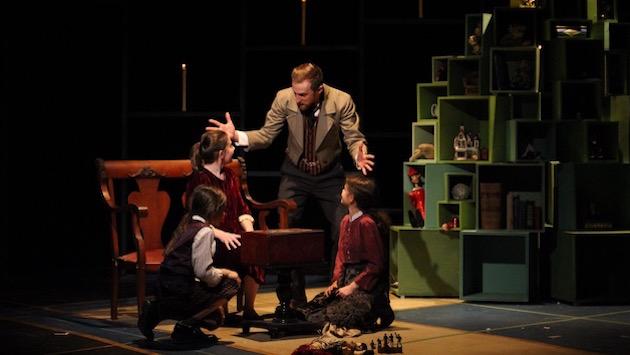 E.T.A. Hoffman’s “The Nutcracker” is known to most people through the Tchaikovsky ballet; but beneath the pointe shoes is source material much darker than tutus.

In Mudlark Theater’s new adaptation, adaptors/directors Christina Lepri and Krista D’Agostino return to the darkness of the original in order to flesh out the characters we all know and love.

“I think one of the biggest things that Krista and I started talking about early on, when we went back to the source material, is that ‘The Nutcracker’ is a complicated story about how Marie [the protagonist, renamed Clara for the ballet] relates to her family,” said Lepri. “The idea of Marie as the middle child of a family, with an incredibly active imagination, and how she and her brother Fritz engage in play in a ferocious way, was important to our adaptation.”

“They beat the mouse king in most adaptations, and that’s it,” said Lepri. “We go back to the story in our adaptation, and to the family.”

“The big thing for us, too, is that the character of Marie has more agency,” replied D’Agostino. “She’s in charge of the story and is making decisions."

Lepri agreed, adding, “Having Marie become a more three dimensional female character is great for us as female artists.” And it’s good for the students, who are experiencing new styles of theatricality with this production.

“We’ve worked a lot with the kids on movement and physicality, and perspective shifts in scenery for the land of the mind,” said D’Agostino. “This is an interesting play because it’s a fantastical world. We looked into movement, and non-realism, and magic in this world. We’re building a new vocabulary for what can exist [for the students] onstage.”

Another important aspect of this production is the deepening of the Nutcracker character, one which, like several others, is overlooked by traditional adaptations. “If you ask somebody who watched the ballet to describe the Nutcracker [character], they may have a hard time,” said Lepri. “Whereas, with the origin story, we get to see the struggle he goes through…it gives our actor who plays the Nutcracker an arc, and no need to play a caricature.”

The actor playing the Nutcracker, Alex Nimrod, is an eighth grader at Nichols. To hear him describe the play sets the tone of the adaptation perfectly within its backstory and characterization, much of which is lost in other adaptations. “Later on in the play, the Nutcracker feels he has responsibility for all the toys, and though it’s a losing battle, there’s a few times he has this one-on-one dialogue and you see his soft side…but he’s trying to put a hard face on the rest of the time,” Nimrod said.

Nimrod’s enthusiasm is very evident. He’s been in Mudlark’s “The Odyssey” and “Peter in Kensington Gardens,” and “The Nutcracker” is, for him, “one of the best Mudlark plays I’ve been in.”

Lepri said, “It’s interesting hearing Alex talk about his production history with Mudlark, because there are some actors we’ve been with for years. They set the tone and the dedication level for newcomers.” Lepri and D’Agostino both agree that the rehearsal room for a Mudlark show is run just like any professional rehearsal room.

“As you get older, your instincts get a little inhibited,” said D’Agostino. “As an actor you may be more stunted, so this is a great age to be working with because of the imagination in telling a story. They’re so fully into it. Here’s a place where they can be uninhibited.”

“They’re working alongside designers who are working in storefronts in Chicago,” said Lepri. “These actors really get to experience having these props and costumes and designs that they might not get to anywhere else.”

Lepri and D’Agostino plan to collaborate again on a Mudlark show in spring. This is, as they put it, a pairing that “shares a vocabulary,” both for them and the company.