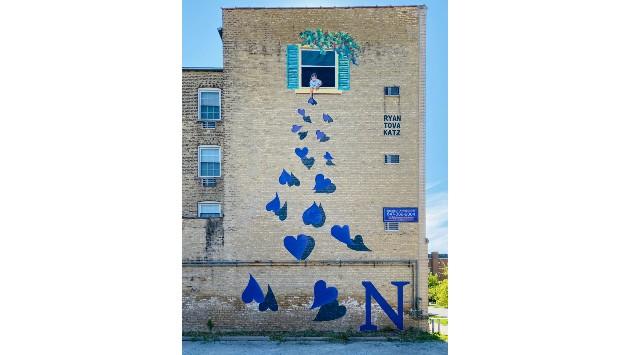 It started out as a way to cheer people up during the cornonavirus pandemic … a little girl, stuck inside, “throwing love out to the world” from her fourth floor window.

The little girl is actually pretty big.  She’s part of a mural which fills four stories on the side of an apartment building at 829 Foster Street. The “love” the child tosses is 15 painted hearts, which grow larger and larger as they “float” to the ground.

The painted wall is the work of Chicago mural artist Ryan Tova Katz.  Katz has done around 50 murals throughout Chicago and the suburbs. She’s been at it here for about seven years.

Many of Katz’s murals are indoors, often are based on what Katz’s clients would like to have painted.  Her motto is “you dream it, I’ll create it.”

But the little girl at the window was Katz’s idea alone.  “I was feeling bad about the pandemic,” Katz says.  The child throwing flowers was a way to make people smile.

Katz donated the mural, so she was given almost total freedom by the building’s owner to do what she wanted. Almost.

There was one request. Tweak the mural to honor Northwestern University, whose 2020 graduates were unable to have a true, in-person graduation. So red hearts became purple, and a large Northwestern “N” was painted at the base, a place, Katz says, where students could come and get their pictures taken. “A socially distanced photo site,” as she puts it.

Ryan Tova Katz’s background is almost as colorful as her murals. The 37-year-old Cincinnati native has painted all over the world, particularly in impoverished areas. In Costa Rica, Katz “bartered murals for places to stay” after college. She went to India, Thailand, and Vietnam, starting a non-profit called Blossom Youth Foundation, and put many of her murals in orphanages.

In Chicago, Katz says she “used to work four jobs and paint murals on the side.” Now, however, it’s a full-time job … and “on the side” today means on the side of a building, where a little girl and her purple flowers bring a bit of joy at a time we could all use it.