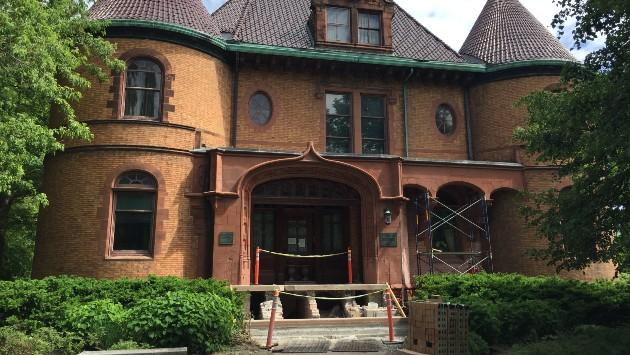 Will museums themselves become museum pieces? That’s a big concern these days for cultural institutions. They remain closed to visitors due to coronavirus, and much-needed donations have started to shrink, because donors are also financially pinched.

“Every single part of our income is jeopardized,” says Eden Juron Pearlman, Executive Director of the Evanston History Center. Not only is attendance down to zero, but special events had to be canceled, and the value of investments is lower.

Time has stood still for museums since mid-March, when Governor J.B. Pritzker’s stay-at-home order closed most businesses, including museums. While the state is gradually re-opening, museums remain shut.

The History Center, for example, is a “unique place,” says Director Pearlman. It’s located in the house of Charles Gates Dawes, vice-president under Calvin Coolidge.

Museums, advocates say, amount to a big business. Some, like Chicago’s Art Institute, are huge. Others, like rural historical societies, may be one person shows.

Either way, more people attend Illinois’ 1,300 museums and historical societies than go to professional sporting events, says the Association of Illinois Museums. That group says museums have a $2.7 billion dollar annual impact in the state, according to an independent study.

But some museums were already in “very fragile condition” going into the pandemic, says Kelly Klobucher, Executive Director of the Illinois Association of Museums.  COVID-19, she says, might kill 20 per cent of them around the nation.

Both the History Center and the Time and Glass Museum expect to be around, but will have to adapt.

“We can weather this,” Perlman says, “but we might look different on the other end.”

And Cameel Halim puts it this way, “We’re not giving up. We’re not crying.” Halim is using the down time to change some of the exhibits. Many events, such as weddings, which use the facility, have re-booked for next year.

Halim did have to furlough three of his six employees, but expects them to return once the museum re-opens, probably over the summer.  “We have patience, and we’re rebuilding our collection,” Halim adds.

The History Center did not let anybody go. The facility, which had been planning pay cuts for its three full-time and four part-time employees, received a federal Payroll Protection Plan loan, so salaries remained intact.

However, “the staff will look different,” Perlman says, in the fiscal year starting July 1. Pay reductions are possible, and staffing levels may have to be re-evaluated in December.

The Center has tripled offerings on its’ web site, something museums will likely have to keep doing as visitors may not visit in person for awhile, even if the museums are open.

The History Center is hoping to open its doors, later this summer. They definitely hope people can come in person on Aug. 26, the 100th anniversary of the signing of the 19th Amendment, giving American women the right to vote. An exhibit on women’s suffrage opened in early March, but had to close after just a few days due to the coronavirus-related shutdown. That exhibit will be back.

The History Center is also exploring what future historians will want to know … how Evanston handled both the pandemic and the protests over the death of George Floyd. The Center is collecting people’s remembrances and documents “so this time doesn’t come and go and we’ve kept nothing,” Perlman explains.

The Halim Time and Glass Museum and the Evanston History Center are very different, and that difference helps make museums part of our culture. Time and Glass opened three years ago. The History Center has been around since 1898. Cameel Halim has a message for other museums: “Tell them don’t give up. It’s going to come back.”

How is not exactly certain. “I’m worried for the future doing business as we have done it,” says Eden Juron Pearlman. “I’m not worried about the organization living on. It’s not going down on my watch.”