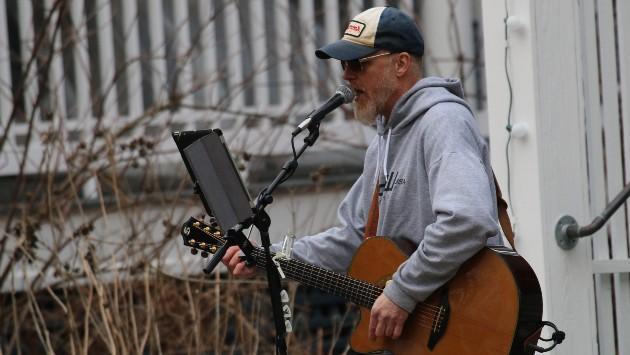 Neighbors on the 1700 block of Wesley Avenue in Evanston got a chance to take a break from their COVID-19 concerns this evening with an open air musical performance.

The newest residents of the block, Frank Kalmar and Judith Bushala, invited a musician friend, Todd Allison, to set up on their front walk and play for the neighbors, who all could keep their social distance while listening to the performance.

Allison, who plays with the Jukebox Heroes group, took requests and played a wide range of tunes for about 90 minutes starting around 5:30 p.m.

Some neighbors brought out chairs to take in the impromptu concert.

Kids had a chance to run around and let off steam.

And some folks chose to capture the unusual event on their phones.

Allison may be known to some Evanstonians from his other job, working the mushroom stand at the downtown Farmers Market — a gig that like so many others is shut down by the pandemic.

But, as Kalmar said in an email inviting neighbors to the event, “If Italy can sing and dance and make public music, so can we!”