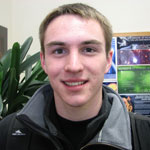 Kyle Kremer, a senior trumpet major in Northwestern University’s Bienen School of Music who also majors in physics, has been awarded the highly selective Winston Churchill Scholarship to study astrophysics next year at the world-renowned Institute of Astronomy at the University of Cambridge.

Kremer, who will receive a bachelor’s degree in music in June, is one of only 14 students across the nation to receive what Office of Fellowships director Sara Anson Vaux calls the “devilishly” competitive scholarship awarded yearly by the Winston Churchill Foundation of the United States. He is Northwestern’s ninth Churchill Scholar and the sixth in four straight years.

At Cambridge, Kremer will pursue a Master of Advanced Study in Astronomy, a new program in which he will combine courses in astrophysics and mathematics with research in astrophysical fluid dynamics and accretion discs.

Kremer happily leads a full double life, one in astronomy and the other in music. “I can’t put physics ahead of trumpet or music ahead of physics,” he said.

“I’ve had amazing opportunities in both at Northwestern. And when a great opportunity comes, I’ve got to go for it," he said. Thrilled to pursue physics at the university where Isaac Newton once taught, Kremer plans to join the Cambridge University Musical Society.

“Kyle’s selection as a Churchill Scholar is a reflection of his remarkable ability and provides dramatic evidence that Northwestern is a place where students are encouraged to reach their full creative and analytical potential,” said Toni-Marie Montgomery, Bienen dean.

“At the Bienen School, Kyle has exhibited enormous musical talent by thriving in one of the nation’s most competitive brass programs for the past four years,” she said. “Now he has demonstrated rare academic aptitude by triumphing in one of our country’s most prestigious academic competitions. The Bienen School is proud of his accomplishments and is delighted to provide its students with an educational environment in which they can simultaneously explore multiple paths to success.”

As a freshman, Kremer approached Weinberg College of Arts and Sciences physics and astronomy professor Vicki Kalogera to see if he could work in her laboratory. By his sophomore year, he and Kalogera had co-authored a paper on the evolutionary history of binary star systems. The article appeared in The Astrophysical Journal, the world’s premier astrophysics publication.

On the music side, Kremer has led the Northwestern University Symphony Orchestra as principal trumpet on numerous pieces, most recently as the off-stage solo trumpet in Mahler’s Symphony No. 3. As winner of the Lima Symphony Concerto Competition, he will return in November to the U.S. from Cambridge to be featured soloist with that Ohio orchestra.

To hear Kremer describe the number of hours he dedicates weekly to trumpet practice, research, lessons, classes and homework makes one think his knowledge of astrophysics has given him the power to add extra hours to the 24-hour day.

He takes at least one extra class a quarter, does the required work those classes require and practices trumpet at least 30 hours a week. He also finds time to do research in Kalogera’s physics laboratory, head the Catholic undergraduate group, teach religious studies to fourth graders on Sundays and take part in Sheil Catholic Student Center service projects, including weekly visits to elderly residents at Mather Lifeways.

Managing time well is a given for double majors. To excel in both majors requires what Bienen School of Music Professor Butler calls “a laser focus.” “Kyle has that,” she says. “Kyle is a special trumpet player who has his own voice. He loves physics, he loves performing music and he’s extraordinary at both.”

“I don’t have time to goof around a lot,” admits Kremer. But he doesn’t feel crazed about his busy schedule. “On a day when my brain is fried from a whole day of physics, I go to the practice rooms and play trumpet. Music provides my scientific mind with a break. And it works in the other direction just as well.”

In 2011 Kremer was awarded a Goldwater Scholarship, one of the most distinguished national honors for college sophomores and juniors who study science or engineering. Last summer, as winner of a National Research Fellowship, he conducted research at Princeton University’s Plasma Physics Laboratory.

The Churchill promotion of the scholarship winners referred to a letter of recommendation that refers to Kremer as a “future leader in our fields,” as having “exceptional and single-minded mastery of the arts and sciences” and as combining “an intense commitment to the highest intellectual and artistic values with a similar commitment to its ethics and its delineation of human dignity.”

“What’s so great about Northwestern is that I can major in music and physics without people questioning my dedication to either field,” says Kremer. “Chris Martin is the principal trumpet player in the CSO and one of my Northwestern trumpet teachers. He’s into astrophysics as a hobby and always asks me about it. There’s just a really supportive environment for people with multiple interests at Northwestern. I don’t think that’s true at every school.”

“This scholarship affirms our pride in attracting music students such as Kyle, who take full advantage of the opportunity at Northwestern to receive a premier musical education as well as a first-class education in science, the arts and humanities,” said Office of Fellowships director Vaux.

And the Northwestern experience will be enhanced even further with the building of a 150,000-square foot facility that will house both the Bienen School of Music as well as part of the School of Communication. Construction will begin soon on the Goettsch Partners-designed lakefront building, which will include state-of-the-art performance and practice spaces.