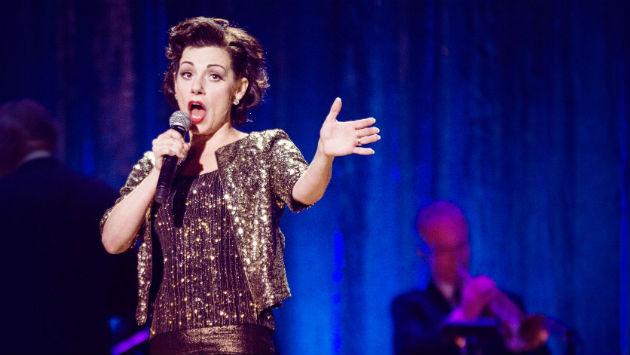 Every fall since 2012, Music Theater Works has moved into Evanston’s historic Nichols Concert Hall with a series of concerts celebrating the work of the composers of the Great American Songbook. This year, it will be something a little different.

The annual fall concert will focus for the first time on the music made famous by a particular artist, when Angela Ingersoll stars in “Judy Garland: Come Rain or Come Shine.”

Judy Garland possessed the most iconic female voice in American show business; or did that voice possess her? She started in vaudeville at the age of two; her early audiences were astounded to hear such powerful vocalism emanating from her petite frame (as an adult, she was only four feet, eleven inches tall).

Entertainer George Jessel, who first encountered her on the vaudeville circuit when she was twelve years old, was taken by the maturity of her performances; he later recalled that even then she had the voice of “a woman with a heart that had been hurt.”

When we consider her career, the drama of her life—her tumultuous Hollywood career, her many marriages, her battle with drugs and alcohol– sometimes overshadows her real achievement.

What makes her so important is that she was a truly great singer, who invested everything she sang with total, heartbreaking conviction. The paradoxical combination of strength and vulnerability that define her greatest performances remains fascinating even today.

When singers today approach the Garland songbook, they need to bring her fearless commitment to the stage, and they need to have the pipes to back it up. Anything less will not get the job done.

Critics agree that Angela Ingersoll, star of “Judy Garland: Come Rain or Come Shine,” has what it takes to evoke Garland’s magic in such signature numbers as “Over the Rainbow,” “Get Happy” and “The Man That Got Away.”

Ingersoll’s stage career has encompassed everything from Shakespeare to musical comedy, in addition to concert performances that have taken her across the country.