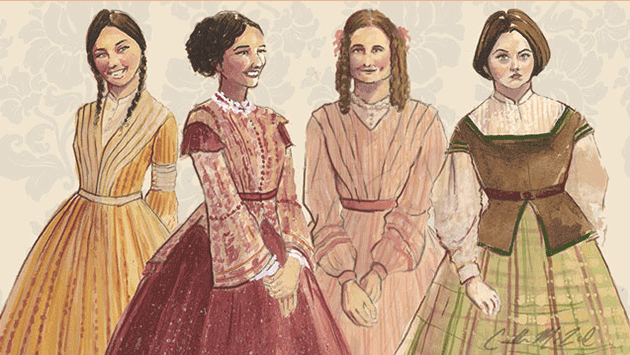 Louisa May Alcott’s popular Civil War-era saga about love of family and country and the lives of the four March sisters — Meg, Jo, Beth and Amy — will be set to music at Northwestern University from Nov. 7 to Nov. 23.

Based on Alcott’s beloved novel, “Little Women: The Broadway Musical” production is part of the University’s Virginia Wadsworth Wirtz Center for the Performing Arts’ 34th Mainstage season. It will be directed by School of Communication Professor Emeritus Dominic Missimi.

With book by Allen Knee, music by Jason Howland and lyrics by Mindi Dickstein, “Little Women: The Broadway Musical,” will be staged in the Josephine Louis Theater, 20 Arts Circle Drive, on the University’s Evanston campus.

Performances are at 7:30 p.m. Thursdays through Saturdays and 2 p.m. Sundays.

Talkbacks with the cast will follow the Friday, Nov. 7 and Sunday, Nov. 9 performances with Missimi as a special guest, as well as on Thursday, Nov. 13.

Northwestern’s musical production focuses on the indomitable Jo, the story’s principal character and the second eldest of the four March sisters. While her father is away at war, Jo tucks herself away in the attic to begin writing a joyful and heartbreaking coming-of-age story while drawing inspiration from her colorful family, including her loving mother and three memorable sisters.

“Louisa May Alcott demonstrated through her classic novel powerful themes of family bonds and the emergence of women and their independence,” says director Dominic Missimi. “Ms. Alcott takes a particularly American slant to the lives of her characters. They are simple, poor people, with outstanding qualities — like a strong worth ethic, devotion to charity, love of country, valued friendships and unquestionable respect and love of parents and siblings.”

Though perhaps old fashioned, Missimi believes that the themes of Alcott’s story are important and enviable, especially in our current global situation of unrest.

“If we could partake in any of the sense of “community” that is shared by the March family, what a better world we would live in,” added Missimi.

The family-friendly musical will feature a Northwestern University student cast.

Tickets for the Wirtz Center’s “Little Women: The Broadway Musical” are $30 for general public; $27 for seniors over 62 and Northwestern faculty and staff and educators; and $10 for full-time students with valid IDs (at the door) or $5 tickets exclusively for full-time Northwestern students on advance purchase. Discounts are available for groups of eight or more.

Single tickets can be purchased by phone through the Wirtz Center Box Office at 847-491-7282 or online at wirtz.northwestern.edu.