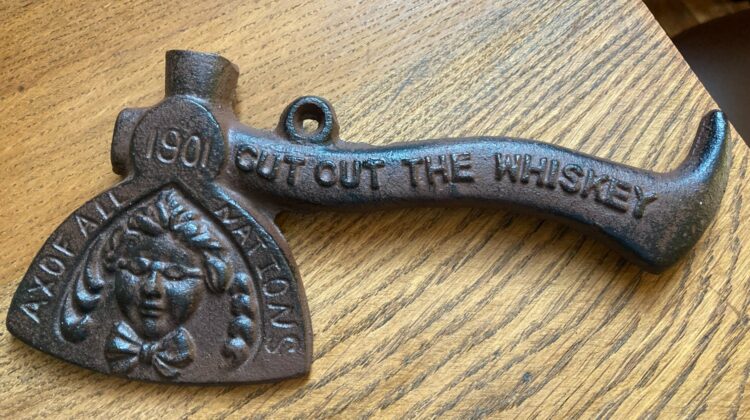 When Lori Osborne opened the door the other day at the Frances Willard House Museum in Evanston, she was in for a surprise.

Osborne is executive director of the Center for Women’s History and Leadership, which operates the museum. She gives tours.

Looking down briefly, Osborne discovered an ax lodged between the screen and front doors. No note. No indication of who left it there, or why.

But considering what it said on the ax, the Willard House must have seemed like the most logical resting place in Evanston.

The ax became a symbol of the fight against demon rum, although it was a mistake to think that Frances Willard herself ever used one or even endorsed the idea.

Willard was a founder and later president (1879-1898) of the Woman’s Christian Temperance Union, a group which fought against the abuses of alcohol and helped lay the groundwork for Prohibition, America’s brief experiment with banning booze.

Willard lived in Evanston. The current museum on Chicago Avenue was her home and WCTU headquarters.

But while Willard led the anti-alcohol crusade, she was not an ax-wielding, saloon-entering, barroom smashing radical. That was Carrie Nation.

And on the 9-inch long ax left at the Willard House it said “AX OF ALL NATIONS,” an obvious reference to the last name of the anti-booze crusader.

There was also an engraved face of a woman, presumably Carrie, the date 1901, and a slogan “CUT OUT THE WHISKEY.”

On the other side, the possible manufacturer of the ax put its name: “ART STOVE CO., DETROIT, MICH,” with a plug for that company’s products, “LAURET STOVE AND RANGES.”

Osborne, who also volunteers at the Evanston History Center, says it’s not every day that someone secretly drops off an item, but “it is something that does happen.”

“Every once in awhile, people are cleaning out their attic” and discover an item which might be valuable, or at least interesting.

Valuable financially, probably not. Similar axes are available on EBay for around $200. But valuable historically, and interesting? For sure.

Assuming it’s legitimate and not a reproduction, Osborne says the ax “would definitely fit our collection. It’s an interesting little artifact,” which will go in a display case with several other axes, including one which saloon owners hung over the bar, which stated “All Nations Welcome Here Except Carrie.”

In fact, the ax shows the differences between Willard and Nation. Willard’s causes went beyond alcohol, and was a radical in her own, less confrontational way. She advocated for social and labor reform, women’s suffrage, and was an educator. Willard was the first dean of the Women’s College at Northwestern when the university became co-educational in 1873.

As for the ax left at the Willard House, even if it is clearly a Carrie Nation ax, the origin is still unclear.

There was indeed an Art Stove Company in Detroit. In fact, before it was the Motor City, Detroit was the Stove City. According to a 1928 article in the Detroit Free Press, “Detroit has been the leading stove center of the world….”

Several of the EBay, Amazon, and auction house entries describe the Nation ax as an advertising premium, perhaps given away by Detroit Stove.

But maybe not. Carrie Nation sold souvenir axes to help fund her activities, and even bail her out of jail following her frequent arrests for saloon-busting.

And it’s hard to believe the the Art Stove Company would misspell the name of its own products.

According to a company catalog at the Detroit Historical Society, Art Stove made “LAUREL” products … that’s Laurel with an “L” at the end. But the Nation ax says “LAURET Stove and Ranges,” with a “T” ending the name.

Maybe Art Stove made them and left the misspelling, maybe somebody else made them for Art Stove, or perhaps Carrie Nation herself contracted with a manufacturer.

The 1901 date on the hatchet could refer to the Pan-American Exposition held at Buffalo, New York, that year — at which Nation is said to have sold replica hatchets to help pay the fine for a slander suit she’d lost.

Whatever did happen, the exact story of who made the ax for whom remains as big a mystery as whoever dropped it off at the Willard House.

Ironically, neither Frances Willard nor Carrie Nation lived to see the 18th Amendment (Prohibition) become part of the Constitution in 1919. Willard died in 1898, Nation in 1911.

Art Stove was still around, but was taken over by Michigan Stove in 1923.

Prohibition died 10 years after that.

But the WCTU lives on, still headquartered in Evanston.