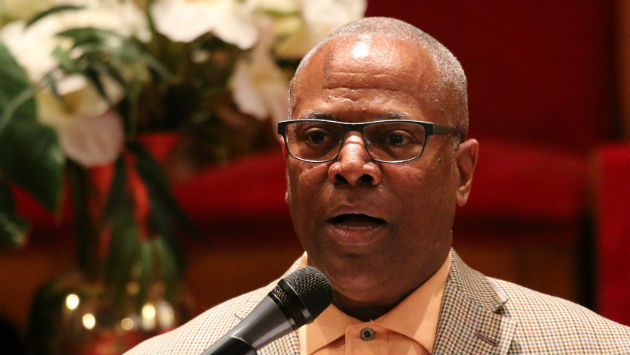 The Rev. Michael Nabors, president of the local chapter of the NAACP, voiced concern today about language used by both students and Northwestern University’s president in the midst of student demands that the school defund its police department.

He also offered the organization’s assistance in attempts to mediate the dispute.

Here’s the text of his open letter:

To Northwestern University and the Evanston Community,

On behalf of the Evanston/North Shore Branch of the NAACP, I would like to offer an opinion regarding the recent protest calling for the abolition of the Northwestern Police Department and the response of President Morton Schapiro.

Without question, we are living in tenuous and trying times as a nation. The COVID19 pandemic, the resurgence of racism aimed specifically at Black people in the United States and the uncertainty of the upcoming election, all combine to create an atmosphere of uncertainty. Of course, there are considerably more issues; the rigor of academic performance in distance learning, family relationships, personal relationships, financial stress and every day issues like what to prepare for dinner each night.

In light of all of these, there is something in the atmosphere that is calling for and demanding our time and attention. It has to do with social justice, the ill-treatment of one group, ethnicity and race of people by the majority.

Since the death of George Floyd earlier this year, the nation and world has exploded with civil disobedience protests. While the United States has been the center of attention, other nations have taken to city streets, joining in a protest aimed at confronting and ending racism directed at Black people. The high rise of populist, White Nationalism and White Supremacy groups during this time, is cause for significant concern for all Americans.

Our nation possesses a history of public demonstration. The First Amendment bars Congress from abridging the freedom of speech, or of the press; or the right of the people peaceably to assemble, and to petition the Government for a redress of grievances.

I have been in Evanston five years and during this time, dozens of rallies, demonstrations and assemblies have taken place. Houses of worship, Fountain Square and other outdoor areas have been venues for gatherings.

Such calls should invite opportunities for dialogue and discussion about the historical reality of racism in law enforcement agencies around the nation. These discussions are difficult precisely because they are addressing a difficult issue. Yet, they should and must take place.

As I read the article in the Daily Northwestern, I was disheartened to hear about language used, making the issue of law enforcement and racism decidedly personal. However, the right to protest also includes uncomfortable language that is spoken and directed towards others.

President Schapiro’s concern about potential anti-Semitism is a serious one. No one engaging in a just protest against racism can be anti-Semitic or have biases against any other group. That is hypocrisy. In addition, chants like “f—- you Morty” and “piggy Morty” are deeply offensive and possesses no analytical or critical objective for mediation or solutions to the problem.

At the same time, I am concerned language coming forth from the Office of the President. “I am disgusted by those who chose to disgrace this University in such a fashion.” Such language makes it difficult to provide the opportunity for conversation, mediation and finding common ground.

Against the backdrop of all this, we also have District 65 in Evanston, whose new Black Superintendent has received horrible threats (including death threats) for his
work on equity in the District. The work is aimed at helping bridge the academic achievement gap between white and black students. The language hurled at Dr. Horton and other Black administrators is reprehensible and unacceptable.

Has it come to this? Has language spoken in some of our nation’s highest offices, now become the norm in voicing our dissent and concerns towards one another? With all of our perspectives and opinions about law enforcement and the Black students and Black people, it is critical that we find space for dialogue, both public and private.

With our nation having moved towards an inability for elected officials to agree on any single issue, it becomes imperative that local communities like Evanston, find common ground. Doing so always leads to higher ground. And higher ground leads to working together to identify avenues towards wholeness, healing and solutions.

There is no question, change and transformation are in the growing winds blowing across our nation. Perhaps Evanston and Northwestern, Northwestern and Evanston, can work together to resolve long-standing issues. In doing so, we may even serve as a model for the nation. We need it more than ever.

If the Evanston/North Shore NAACP can be of any assistance in helping mediate and work towards resolving these concerns related to Black and brown students, we would be more than happy to do so.

We have no hidden agenda. Simply a heartfelt sentiment and sterling demand that all people of color are treated the same way all others are treated. It is a new day and we are working to forge a new, better America for everyone. May it begin in our own “Beloved” community.