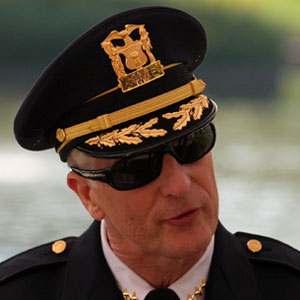 Evanston Police Chief Richard Eddington says overtime and other expenses for his department during the NATO summit cost the city just over $117,000.

Eddington, in a memo to City Manager Wally Bobkiewicz, said federal intelligence agencies and protest organizers both "vastly overestimated" the number of protesters who would show up for the summit in Chicago.

And he says the arrest by Chicago police of three people on terrorism charges before the summit began "had a dampening effect on the willingness of protestors to engage in illegal activities."

Eddington says that the expenses, while substantial, were reasonable given the information available at the time planning started.

The chief says that to maintain regular patrol and traffic operations during the summit, he had special teams shifted to NATO-related operations for the four day summit period, May 18-21.

Those teams worked 12-hour shifts in three-hour blocks, including one period back at the station to catch up on phone contacts and paperwork.

Areas given extra coverage during the summit included transit stations, downtown and the lakefront, Howard Street and Beat 77 on the west side.

With no major summit-related protest activities, Eddington says he heard from many members of the public that "cops are everywhere." And with the extra officers on duty, Eddington says, crime levels in the city were substantially lower than usual that weekend.

Eddington says it's been a long time since Evanston and many other suburban departments have faced major crowd control challenges.

So the department cooperated with Northwestern police and the Wilmette and Elk Grove police departments to provide 12 hours of training to each officer assigned to use special crowd control equipment.

And the department invited retired officers who'd handled civil disorders in the '60s and '70s to a roundtable meeting organized by retired chief William McHugh, who'd headed the Evanston department in that era.

Eddington said that discussion "provided unique insight into how Evanston historically has managed civil disorder — a tradition characterized by minimal confrontation and limited use of force."

Eddington says the NATO summit marked the first time that suburban police personnel were invited into the federal intelligence center for a national special-security event. Cmdr. James Elliott was Evanston's representative there.

In addition, the Skokie police department hosted a suburban intelligence operations center during the summit, and Eddington that will "prove to be invaluable in managing and mitigating the impact of future major events."

He says Evanston cut summit-related costs by using existing crowd control equipment and tactics rather than spending a recommended $20,000 to buy teargas munitions and that, instead of using rented vans, it lined up city Parks and Recreation Department buses to be used to transport officers to disturbance locations.