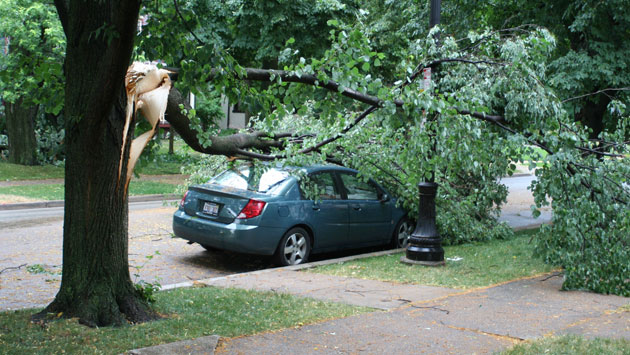 Update 5:15 p.m.: Nearly 12,000 ComEd customers in Evanston reportedly are still without power nearly 10 hours after a powerful storm swept through the area this morning.

City officials say that ComEd reports that at the peak of the storme nearly 19,000 customers here were without power. Across the metro area the power failures from the storm reportedly affected 600,000 customers.

ComEd officials say at the peak of the storm 800,000 customers were without power and 200,000 were restored during the day today. But ComEd says it may be several days before all customers are back in service.

Thirty-two buildings on the Northwestern University campus are reportedly still without electric service as a result of the storm, that's down from 62 immediately after the storm hit..

The CTA suspended service on the Purple Line as a result of the storm until about noontime and there were reports of delays on the Metra North line as well.

It's the third storm in the past few weeks to cause widespread power outages and knock down trees in the area.

NU officials say some of the buildings without electric service do have backup generators and that the school remain open.

City officials say the storm knocked down at least 50 trees across the city, some of which blocked roads, It also disabled traffic signals across much of the city.

Deputy Fire Chief Tom Janetske says one woman was trapped in her car after a tree fell on it in the 2200 block of Sheridan Road, but she managed to get out on her own by the time fire crews arrived.

Janetske says a few small fires were touched off by arcing power lines, but most extinguished themselves.

He says lifeguards at Evanston beaches were on the lookout for a seiche — a sharp rise in water levels — as a result of the storm. Low pressure and winds from the storm sent water sweeping from the west to east shore of the lake, and it was expected to reverse direction and return to the western shore by early this afternoon. There were no reports of any problems from the wave action.

ComEd says as many as 578,000 customers are without power across the metro area — half of those in the northern suburbs. By mid-afternoon there was still no estimate of the number of people without power in Evanston. 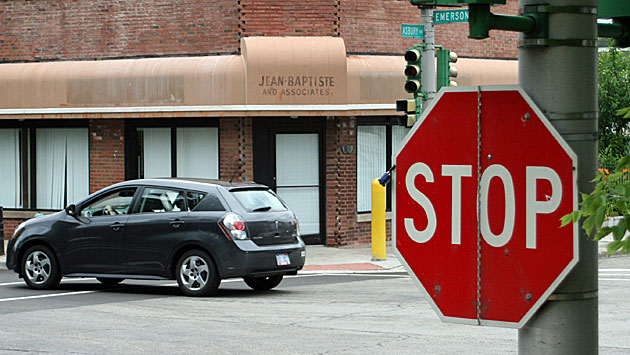 Top: A huge tree limb fell across a car and partially blocked traffic in the 1800 block of Asbury Avenue. Above: Traffic signalsout at the intersection of Asbury and Emerson Street.

Traffic signals were not working late this morning at Asbury and Emerson, Asbury and Davis, and Lake and Ridge as well as at several other locations.

Trees were blocking a number of streets including on Lincoln Street in front of Haven Middle School and on Grant Street east of Pioneer Road.

Linda Khrumin of the Talking Farm said a tree had fallen across the group's farm plot on Dodge Avenue across from Evanston Township High School, damaging several of the raised planting beds.

The city is urging residents to call 3-1-1 to report downed trees, road hazards or for other information. If the loss of power requires emergency medical or police assistance, call 9-1-1. 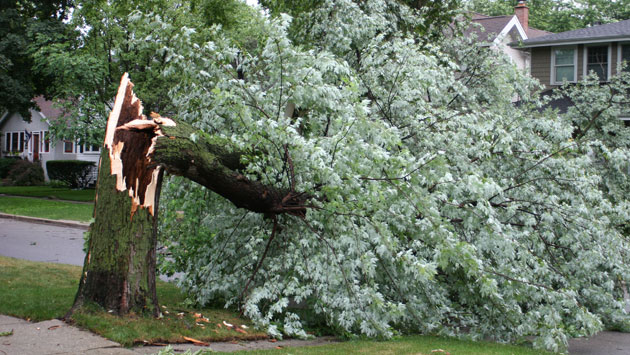 A large maple tree blown down in the storm blocks Grant Street between Hartrey Avenue and Pioneer Road.

The power failure was known to have affected an area north of Church Street and west of Asbury Avenue. Most of downtown Evanston appeared to have power, but power was out to portions of the 500 Davis St. office building. 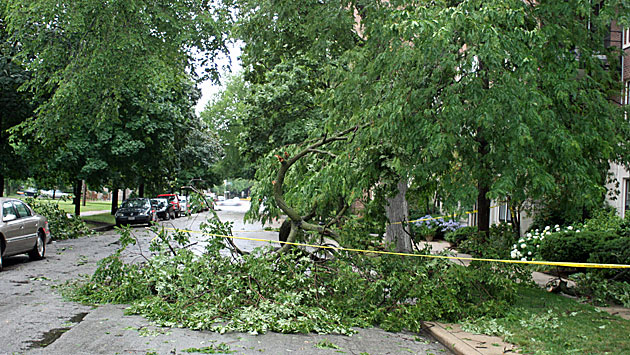 The CTA Yellow Line was out of service reportedly because of tree limbs blocking the tracks for a whle this morning and there were major delays on the Red Line as well..

ComEd said it may take more than one day to restore power to all customers affected. The city said it had reports of more than 100 downed lines in Evanston.

In the event of a prolonged power outage, ComEd suggests: