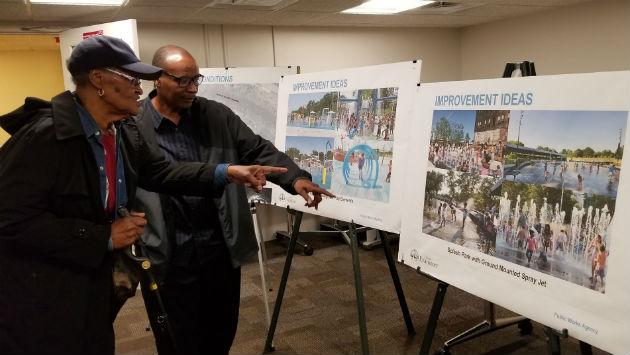 Evanston  city staff sought ideas from residents on how to expand and upgrade Beck Park at a 5th Ward meeting Wednesday night.

The park now runs along the east bank of the North Shore Channel from Church to Emerson streets. Previously the section just north of Church had been the site of Shore School, which was recently demolished and replaced with a water pumping station that occupies only a portion of the school’s former space.

The land is owned by the Metropolitan Water Reclamation District and leased by the City of Evanston.

City officials have suggested creating a splash park on the site, to give children who live relatively far from the lakefront a nearby place to play in the water.

One neighbor said he didn’t want a splash park. “It’s not going to make our neighborhod any better than it is,” he said.

Other residents said they’d welcome a splash park, but raised questions about whether — because of concerns about traffic — it should be located farther north in the park, rather than adjacent to the new pumping station.

The pumping station has washroom facilities, which are currently locked, but would be available for future users of the park.

Alderman Robin Rue Simmons, 5th Ward, said the city’s proposed budget for next year includes $150,000 for planning the park improvement project, and she wants it to become “the best and most exciting and innovative park that we’ve seen, with amenities that we haven’t seen anywhere else in the city.”

Parks Director Lawrence Hemingway said new playground features could have a range of themes, as shown in images displayed at the meeting that showed everything from a whale kids could walk into to a series of mounds they could crawl through.

Carlis Sutton, who lives about a half mile east of the park, suggested the play area should have “an Afrocentric theme with elephants and giraffes and pyramids.”

Hemingway responded that the city could “go to a playground developer and come up with an original threme if that’s what the community chooses to do,” or go with traditional playground equipment like “slides and climbing and rocking elements.”

Stephanie Levine, a senior project manager with the city’s Public Works Agency, said that after an initial meeting like the one held Wednesday night, the city’s park planning process generally involves hiring a consulting team that will hold additional meetings with residents to develop ideas and produce concept drawings and then gradually narrow the range of options to a single design.

Once there’s consensus around that design, then detailed drawings are prepared to send out for bids on the project, she added, and meanwhile work is underway to get funding lined up to pay for the work.