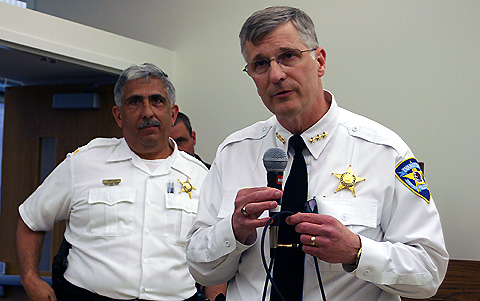 Scores of Evanston residents concerned about gang and drug problems in their neighborhoods turned out for a meeting at the Levy Center Tuesday.

Scores of Evanston residents concerned about gang and drug problems in their neighborhoods turned out for a meeting at the Levy Center Tuesday.

Commander James Hutton of the Police Department's drugs and gang unit, the Neighborhood Enforcement Team, told them his officers have arrested nearly 100 people so far this year on drug and other charges and seized four ounces of cocaine, about 11 pounds of marijuana and a number of handguns.

Neighbors concerned about how to recognize gang activity on their streets were told that's getting harder to do. Officers said gang members are less likely to dress in gang colors or have prominent gang tattoos today than in the past because they've learned that the flashy ways draw police attention and detract from their efforts to sell drugs.

Some have taken to dressing anonymously, for example in white t-shirts and blue jeans, to make it harder for officers to identify them. But as one officer said, that doesn't mean every kid dressed in a t-shirt and jeans is a gang member.

Detective Ryan Glew said various gangs are active in several neighborhoods in south and west Evanston, and he reviewed lists of gang colors and symbols. 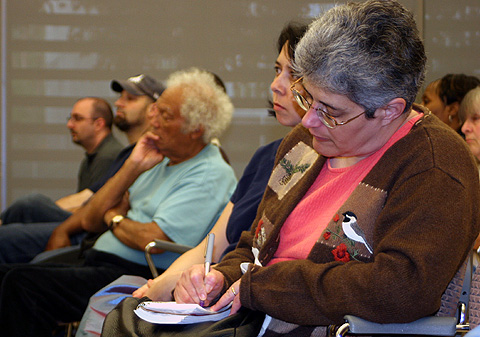 Taking notes on the gang problem.

He said while gang symbols often show up as graffiti sprayed on walls, most graffiti is just tagging done by individuals who want to show off and isn't usually associated with more serious criminal activity.

For neighbors who aren't sure whether people hanging out on the street are actually dealing drugs, the police also showed a series of surveillance videos of street-corner drug sales.

Det. Glew said drug dealing is characterized by a lot of quick contacts and hand-to-hand transactions. If the same folks are just standing around talking for a long time, he said, they're probably not dealing.

"A lot of it is kind of subjective," he added, "but if you see someone jump into the back of a car, go round the corner and then come right back," and it happens over and over, then it likely is drug dealing. 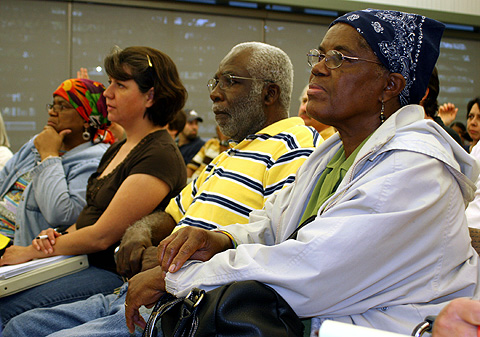 Alderman Ann Rainey, 8th Ward, who organized the meeting, asked about the use of local shops by some drug dealers.

Det. Glew said drug dealer sometimes hide small quantities narcotics in convenience stores or use them to turnover cash they've received from buyers. He said most of the time the store owners aren't willing participants in the drug dealing.