More than 200 people walked into the empty Osco Drug store in south Evanston tonight to hear about plans to turn it into a specialty supermarket.

After two years of frequently disappointed hopes, most folks in the crowd seemed ready to greet store owner Nick Merikas as a hero. 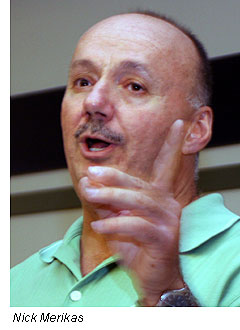 They cheered his description of his plans for stocking the store and raised no objections to the plan to stay open from 7 a.m. to 9 p.m., with shorter hours on Sunday.

A few people did raise questions about selling beer and wine at the store.

One asked why liquor sales should be allowed at a site on the same block as Chute Middle School. But Alderman Ann Rainey, 8th Ward, said at least two other Evanston supermarkets selling liquor have been located near other schools for years and, she said, there’ve been no problems.

Merikas assured one man worried that vagrants might hang around the store because of the liquor sales, that with the store owners on site, that wouldn’t be allowed to happen.

He said the store will feature a wide selection of fresh produce, hundreds of cheese choices in the deli and a high-quality selection of meats and fish.

Neighbors offered a range of suggestions for the operation — from being extra careful about snow shoveling to keep a path clear for students walking to the school, to eliminating plastic bags to be more environmentally friendly.

Merikas said he plans to have the store at the corner of Asbury Avenue and Oakton Street open in time for Thanksgiving holiday shopping this fall.