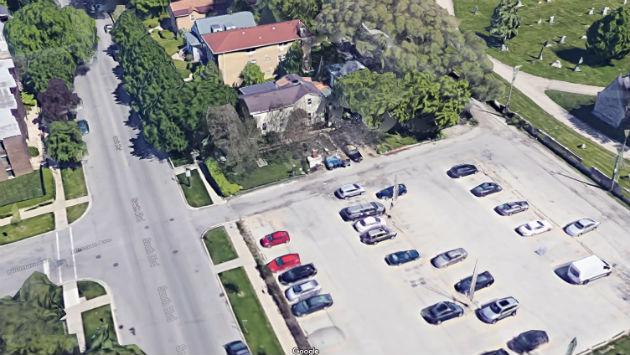 Neighbors opposed to a plan to build affordable housing on a city-owned parking lot at 506 South Blvd. persuaded Evanston aldermen this week to delay action on the proposal for two months.

City staff say that unlike most surface lots in Evanston, this lot is never more than half full and, because it’s just a block from the South Boulevard CTA station, it would make a good location for a new affordable housing development.

The city is also working to include adjacent property owned by the Housing Authority of Cook County in the plan. HACC has four townhomes on its land, one of which was recently damaged in a fire.

A outdoor fireplace and other objects in what appears from city maps to be the public right-of-way adjacent to the parking lot. (Google Maps)

Calvin Lynn, a contractor who owns the house at 424 South Blvd, adjacent to the parking lot, said the new housing would cost him the parking area he now uses for his truck.

Dan Fajerstein, who owns a law office nearby at 513 Chicago Ave., said he needs parking for clients and that building on the parking lot would make the neighborhood as congested as Rogers Park.

Although redevelopment of the parking lot was suggested by Alderman Cicely Fleming, 9th Ward, in October 2017, and the city’s Transportation and Parking Committee approved seeking an appraisal of the property last July, several neighbors complained that they hadn’t been informed of the plans.

No actual proposal to redevelop the property has been submitted. At this point city staff was seeking authorization to issue a request for proposals inviting developers to submit such plans.

Once received, any proposal would have to go through several months of public meetings under the city’s planned development review process.

Alderman Melissa Wynne, whose 3rd Ward includes the parking lot site, moved to table the request for proposals until the City Council’s April 8 meeting to provide time to have a meeting with the neighbors to discuss their concerns.

Alderman Fleming objected to the delay saying it would lead lead to too many restrictions on the redevelopment project. But the motion to table was approved on an 8-1 vote.