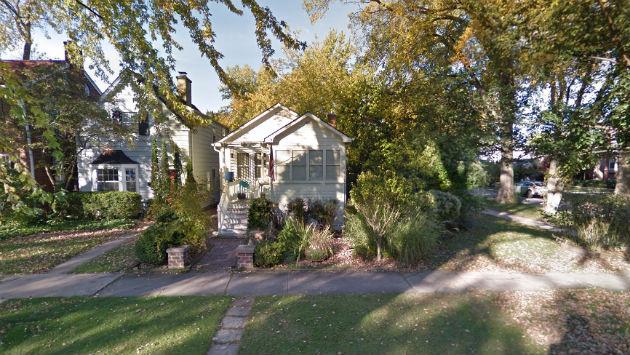 Three 25-foot wide lots sit in a row on Reese Avenue just south of Hartzell Street in northwest Evanston. The Zoning Board of Appeals is to vote tonight on whether a house can be built on the one of the three lots that now sits vacant.

Property owner William James has submitted plans for a 1,936 square foot home on the corner lot at 2626 Reese Ave.

On the left, a view of the planned house from Reese. On the right, the back of the home.

The property has been vacant for decades and was sold for unpaid taxes several years ago, but is considered by the city to be a buildable lot.

The north facade of the proposed home, which would face Hartzell Street.

This is the third recent proposal to build a home on the lot. A 2016 plan from a previous owner for a 35-foot-tall home was withdrawn in the face of neighborhood opposition.

A proposal from James was rejected by the ZBA in January of this year.

The north facade of the plan rejected in January.

ZBA members in January said the design submitted then was too imposing for the lot and needed to be reduced in scale.

The latest plan reduces the height of the building from 29-feet-8-inches to 23-feet-8-inches by using a gambrel roof, eliminates a separate dining room in favor of an eat-in kitchen and has only two second-floor bedrooms instead of three.

At the suggestion of neighbors concerned about site-lines into the alley, James also has shifted from the two-car detached garage proposed in January to a one-car garage with a one-car parking pad.

Because the area is zoned R1, a 25-foot-wide lot requires zoning variances to build a house more than five feet wide.

A photo from neighbor Richard Horsting, who says the vacant lot floods when it rains.

Richard Horsting, who owns the house next door at 2624 Reese, says that among other things he’s concerned about water that pools in the vacant lot now when it rains.

Horsting also claims that “all the residents who surround the lot are still opposed” to the new proposal.

The new plan was supported by the city’s Design and Project Review Committee on an 8-1 vote. A committee report says James “worked extensively with staff to modify the house bulk to address neighbor concerns while also minimizing necessary variations.”