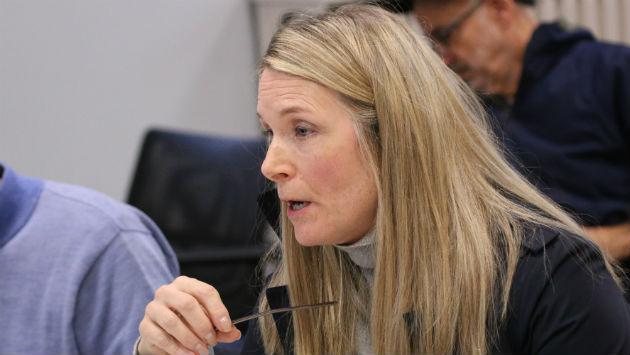 Five neighbors objected this afternoon to plans to have the Salvation Army purchase the Second Church of Christ, Scientist, property at 2715 Hurd Ave. in northwest Evanston.

Anne Smiley, who lives at 2716 Lincolnwood Drive, across the alley from the church, told members of the city’s Design and Project Review Committee she doesn’t believe the Salvation Army is a church. “The reality is it’s more of a business that would be set up in a residential area.”

She claimed the Salvation Army’s presence in the building, located across the street from Willard School, would lead to an increase in traffic and would be detrimental to the health and safety of children.

Smiley’s husband, Henry Kohn, said the Salvation Army would be “a social service agency on land that should be used for single family housing.”

Their neighbor, Peter Boyle, of 2708 Lincolnwood Drive, said the existing church is only in use four hours per week, and the Salvation Army’s move into the building would “exponentially increase” its use and make the neighborhood look more like a business district.

“I moved here to be surrounded by homes, not businesses, Boyle said.

Rick Planos, of 2646 Lincolnwood Drive, said the Salvation Army does great things, but not things that the community necessarily needs.

And Nadia Dimitrisevic of 2821 Thayer St., two blocks from the church, asked how the community could be sure that there wouldn’t be “registered sex offenders” turning up for Salvation Army programs.

Mitchell Melamed, an attorney for the Salvation Army, said the church plans to move to Hurd from its existing building at 1415 Sherman Ave. near downtown Evanston, which he described as being in disrepair.

He said he anticipated the army, which describes itself as “an evangelical part of the universal Christian Church,” would eventually sell the Sherman Avenue building and that the site would likely ultimately be redeveloped for apartments or condominiums.

Melamed said the Hurd Avenue property would serve only as a church and that the group anticipates having between five and 30 people turn out for its various programs during the week. The Hurd property has 30 parking spaces, so “parking won’t be an issue,” Melamed added. The army has 10 parking spaces at its current location.

He said the group operates a food pantry on Sherman Avenue from 10 a.m. to noon on Fridays that draws about 10 people per week, but that it has no immediate plans to offer the food pantry service at the new location and would return to the city to seek a separate permit for that use if it decided to offer it in the future.

He added that the group has no plans to operate a resale store at the Hurd site or to accept donations of clothing or other items there. Its nearest store and donation center is at 4335 Oakton St. in Skokie.

Members of the Design and Project Review Committee asked Melamed to clarify some of the plans for use of the Hurd Avenue property. He indicated those revisions could be available for the DAPR meeting either next Wednesday or the following week.

The Salvation Army proposal is currently scheduled to go before the city’s Zoning Board of Appeals at 7 p.m. on Tuesday, Nov. 19.