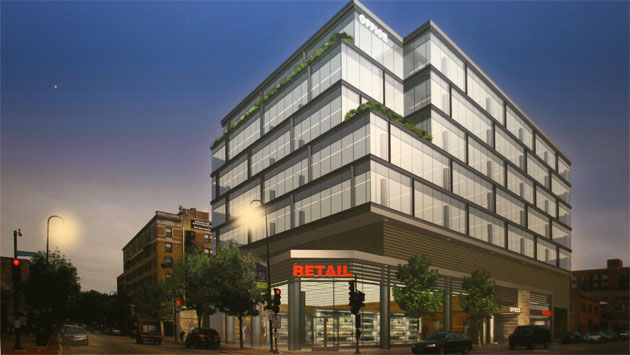 About 75 people met at Lincoln School in Evanston Thursday night to discuss preliminary plans for a nine-story office building planned for the vacant lot on the southeast corner of Chicago Avenue and Main Street. 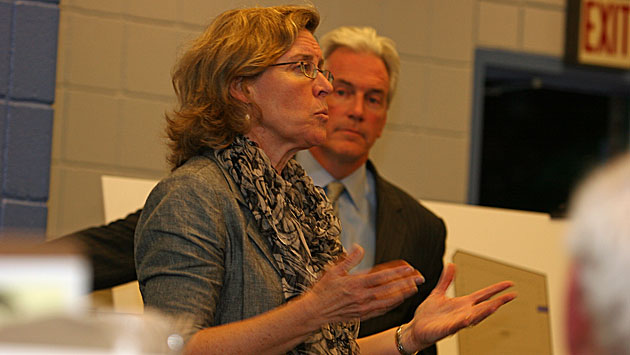 Top: A preliminary rendering of what the new building might look like at night. Above: Alderman Wynne answers a question as project leasing agent Drew Nieman looks on.

Alderman Melissa Wynne, 3rd Ward, traced the history of the site, from the 1920s vintage two-story office and retail building called "The Main" that once stood there, through complex efforts to build a condominum apartment building on the property that ultimately collapsed in the recession.

Wynne said that with the condo market in the deep freeze, developers had recently come to the city proposing either a single-story drug store with a drive-through or an apartment building for the site. 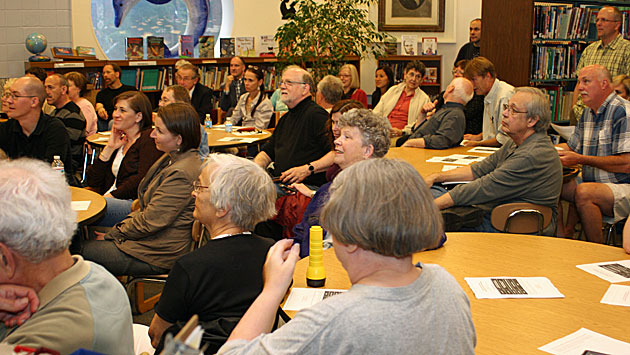 The meeting was moved to the school's library because power hadn't yet been restored to its auditorium after Tuesday's storm.

But she said the "great new economic development team" at the city had concluded that the best use for the site would be a mix of retail and office uses.

Wynne said an office development "would be a catalyst for all of south Evanston."

"We've seen what the movie theater development — with the 909 Davis St. office building — did for downtown," Wynne said, "It sparked so many jobs in Evanston and brought so much life back to the city."

The developers for the project, John O'Donnell and Greg Merdinger, are both former long-time employees of the John Buck Company, a major Chicago developer that best known locally for the Park Evanston rental apartment tower downtown. 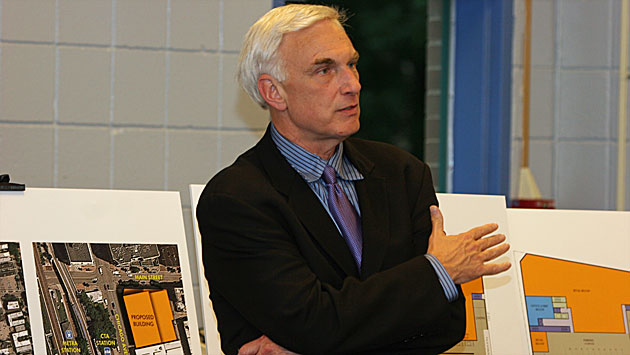 O'Donnell said the building would be designed to attract growing high-tech companies that are looking for a location with convenient mass transit access.

He said the preliminary design calls for 65 parking spaces on the lower level, double-height retail space at the ground level, two floors of above-ground parking and about 80,000 square feet of office space on the five office floors over the parking deck. 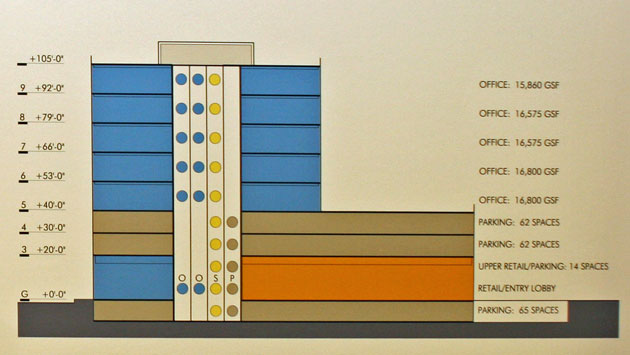 A schematic drawing showing the planned layout of the building.

That parking, O'Donnell said, would be open to the public and, under current plans, would be managed by the city.

One resident asked whether the parking would be sufficient for a building that might have as many as 500 office tenants.

Wynne said that the parking requirements were set by the city's zoning ordinance. And both the developers and some other residents suggested that the convenient access to the CTA and Metra would encourage most people working in the offices to use public transportation rather than driving. 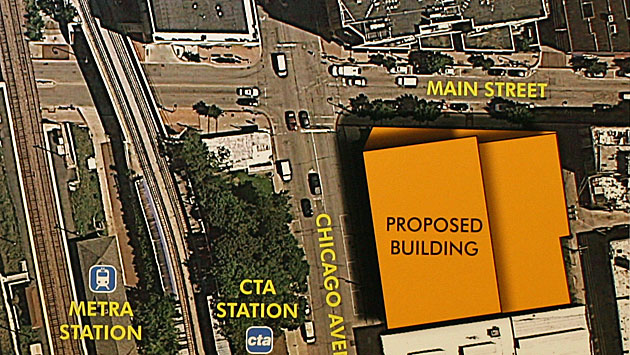 An aerial view of the proposed office building site.

Unlike many projects built during the last decade, this building won't be constructed unless tenants are already signed up to rent the space.

Another John Buck Company alumnus, Drew Nieman, now with Colliers International, has the job of finding those tenants.

Nieman said that Evanston is a small market for office space, but that it is the healthiest of all the suburban markets. 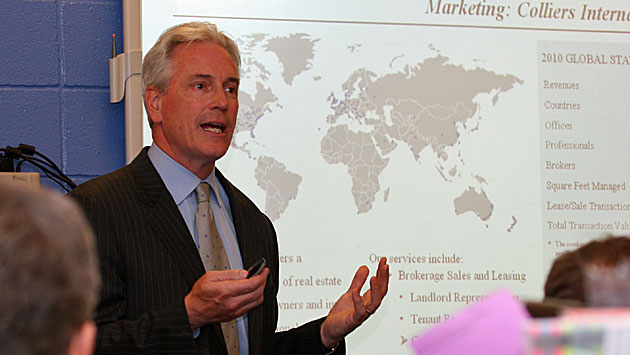 "There are seven buildings in Evanston that we would construe as competition for this project, and four of them are almost completely leased — with vacancy rates of less than two percent," he said.

The other three, have vacancy rates around 20 percent — but there are reasons for it — either they are older buildings that are just tired and need to have money spent for retrofitting, or they once had lake views that they no longer have because of more recent construction nearby.

"So this planned new building, with its location, has all the basics for success, and I didn't even mention the Starbucks across the street," Nieman added. 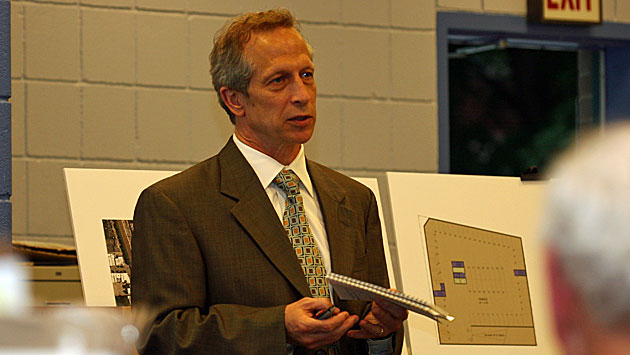 Project architect Don Copper of GREC Architects in Chicago said the building design features a four foot setback from the property line to provide more sidewalk space for pedestrian as well as setbacks at upper levels to provide better views from the offices.

One resident claimed the building couldn't possibly be energy efficient with the planned large glass area, but the developers said that with recent improvmenets in glass technology it was entirely possble to do a glass-sheathed building and win LEED certification.

Another resident said she loved being able to walk her dog on the current vacant lot and wondered if dog walking space could be included in the building's plans. Alderman Wynne suggested that the city already has a dog beach and parks available for dog walking.

But others praised the proposal and the developers got applause from the group as the meeting ended.