Aldermen reversed their acceptance of four police emergency blue-light phones from Northwestern University Monday after a half dozen neighbors voiced fears at the council meeting that the phones would brand their blocks as high crime areas. 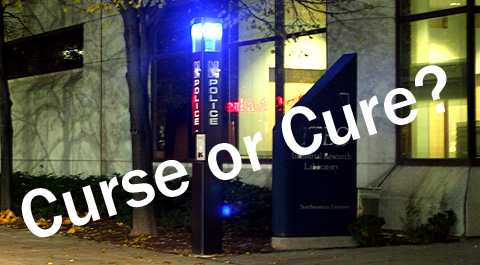 A blue-light phone box outside a university building at Maple Avenue and Clark Street.

Real estate agent Carolyn Smith of 2118 Orrington Ave. said she’s had potential home buyers looking at a property across from a university dorm see the blue light phone there and raise questions about whether it’s a high crime neighborhood.

Attorney David Schoenfeld of 2039 Orrington Ave. said he was concerned about the cost, appearance and stigmatizing effect of the phones.

He claimed "the main purpose of blue lights is to satisfy concerns of parents of prospective students," and added that by accepting the phones the city "may be agreeing to fund a marketing effort for NU in perpetuity that’s of no benefit to the neighbors."

Jeanne Lindwall of 625 Library Place said the phones had been discussed periodically over the past couple of years, but the proposals had always been for phones at CTA stations and along the lakefront, but suddently, she said, the plan was shifted to include phones in residential neighborhoods without seeking any input from neighbors.

But Kate Pascale of NU’s student government organization said the phones "are of great value to students." She argued that "the lights are a deterrent to crime."

In response to claims by some neighbors that the prevelence of cell phones today makes the blue light phones irrelevant, several speakers backing the emergency call boxes said that cell phones are often stolen by robbers, leaving victims with no other easy way to summons help.

Alderman Edmund Moran, 6th Ward, who chairs the 911 committee that recommended the phone plan to the council, said a number of the phones already are located at university buildings in city neighborhoods "and I’d never heard a single person complain about them before tonight."

"There is crime in my ward, in every single ward in this city," Moran added, "and for anybody to suggest that public safety and deterrence of crime in this neighborhood is irrelevant — they’re wrong."

"These students are living in Evanston. They are our residents, our citizens. And I think they’re entitled to protection," he said.

Moran said the city would have insurance coverage to protect it against potential liability issues regarding the phones, "and it probably won’t cost us a cent" beyond what is already charged for liability coverage on the existing 911 system.

Alderman Cheryl Wollin, 1st Ward, who represents areas proposed for the phones, said she "strongly feels that blue lights are a deterrent to crime."

"Lets not pretend they are a stigma" or would inaccurately imply a crime problem, Wollin said, "because, friends, we do have a crime problem in this community."

But Wollin, who voted for the reconsideration motion, said she was happy to talk further about locations for the phones.

The aldermen voted to proceed with plans to install a total of five phones at four CTA stations from Davis Street to Central Street.

Under the plan the university had agreed to pay to purchase and install the phones while the city would pick up maintenance costs and respond to emergency calls placed from the phones.