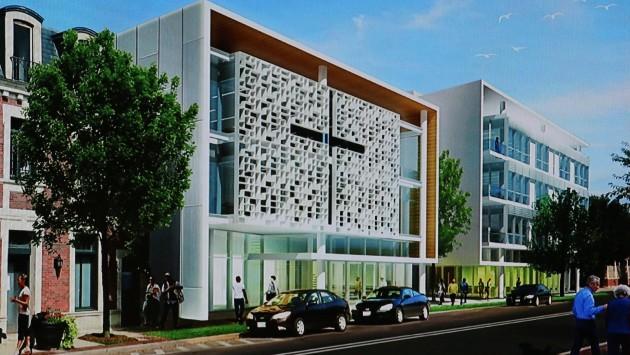 Leaders of Mt. Pisgah Church came in for a wave of criticism Wednesday night as they presented plans for a new affordable housing development at a 5th Ward meeting at the church.

Senior Pastor Clifford Wilson, who has led the church since the 1970s, said church members have been saving and saving for decades to make it possible to build a new church building and provide a community benefit like the affordable housing complex.

The project design, from Suzuki and Kidd architects, calls for a new church buiding on the current church site and on a portion of an adjacent vacant lot owned by the church.

The affordable housing development would go up on the rest of the church-owned lot combined with a long-vacant, city-owned former gas station site just to the east, at the corner of Church Street and Darrow Avenue.

Pastor Eric Blakely said the affordable housing development would have retail space on the ground floor topped by three to five stories of apartments and that the development would provide underground parking.

He showed slides indicating the new 15,000 square foot church building would seat 300 to 400 people and have a construction cost of about $4.5 million.

The affordable housing project, the presentation indicated, could cost between $10 million and $20 million, depending on the project’s size.

Blakely said the subsidized monthly rental rates for the units would range as follows:

He said the church hoped the city would donate the property it owns to the project, that the church would secure bank financing for its new building and that the affordable housing development would be funded with subsidies from federal, state and local government programs and with membership donations.

Concerns voiced by residents ranged from potential flooding of the underground parking to why the project didn’t focus on youth job training rather than housing.

Tina Paden of 1122 Emerson St. complained that if federal money was involved in the project there’d be no preference for Evanston residents to occupy the building.

Carlis Sutton of 1821 Darrow Ave. argued that the building should be no more than three stories tall — including the ground floor retail.

Sutton also objected to a shift of the project concept from providing housing for the elderly to an all-ages affordable housing plan.

Alderman Robin Rue Simmons, 5th Ward, responded that based on a review of the city’s affordable housing waiting list and meetings with the community, she’s concluded that more young families and millennials than seniors are now struggling to find housing in Evanston.

But another woman in the audience said that while some families couldn’t afford it, “there are families that are struggling, like mine, who could.”

The City Council is scheduled to vote Monday to issue a request for proposals for the sale of the city owned property at 1805 Church St.

Rue Simmons said she hopes the church plan will turn out to be the best proposal the city receives but that there’s “a long road ahead” before any final decisions are made.