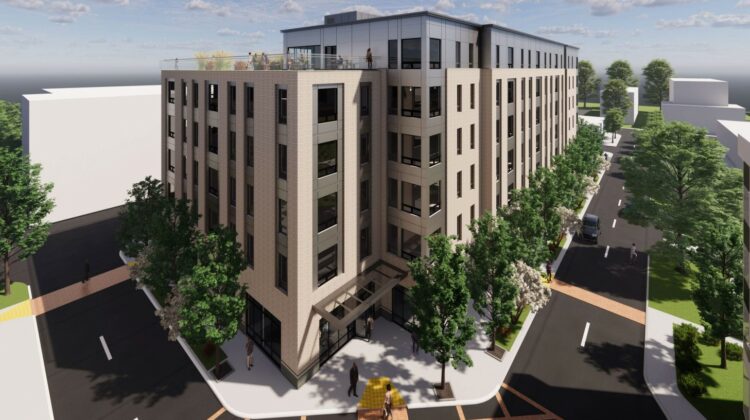 A rendering showing a view of the new building looking southeast from the existing Walchirk Apartments.

The plans for the project were unveiled at a ward meeting last month.

Sylvia Alvino, whose condo at 2252 Sherman Ave. faces the site, said she and her neighbors “don’t want any more residents in this neighborhood.”

“People in the building,” she said, are especially opposed “to having more poor people moving into the neighborhood.”

“I’m not thrilled about having a parking lot outside my back window,” Alvino said, “but a building would be even worse.”

Mary Johnson, of 2250 Sherman, said, “I’d be objecting to any building in that space.”

“Density, crowding and congestion have greatly increased in the 20 years I’ve been in this area,” Johnson said, adding, “I don’t know how we’ll get out of our buildings if this is built.”

Ald. Clare Kelly (1st) said HACC hasn’t yet specified whether the plans for the site would be for a predominantly low income building or a mixed income structure.

“People in my building are opposed to having more poor people moving into the neighborhood,” she added, suggesting that the housing authority should instead focus on building scattered site housing. “Why don’t they use some park district land for that?” Alvino asked.

One dissenting view came from Terri Dubin, a former member of the city’s Plan Commission, who lives at 807 Davis St. downtown, Dubin said the “scattered site housing theories were shot down years ago — because it breaks up minority voting areas.”

Kelly said she thinks the proposed project “is way too big.”

Kelly, who lives a half-block from the proposed site at 823 Colfax St., said she’s met with HACC Executive Director Rich Monocchio and got an assurance that HACC won’t move forward on any more zoning submissions for the project until there’s been another meeting with the community.