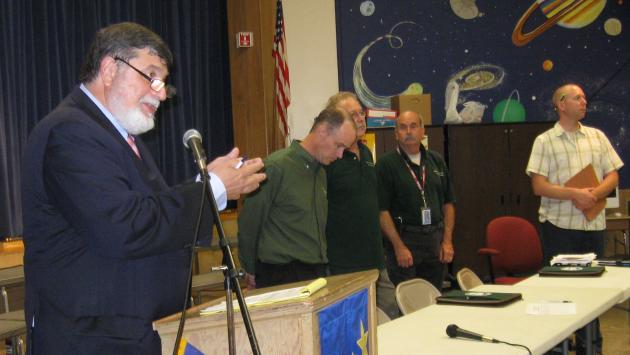 About 100 neighbors of a seven-acre piece of forest in the middle of northwest Evanston turned out Tuesday night for a meeting to express their concerns over plans to double the width of one of the paths through the woods and to pave it with concrete.

Billed as a public forum, the meeting was called by County Commissioner Larry Suffredin, who also serves as a commissioner of the Cook County Forest Preserve District, to quash what he called “misconceptions” about the plans for refurbishing the Dwight H. Perkins Woods, the smallest active portion of the sprawling Forest Preserve System.

When the Cook County Forest Preserve System was conceived in 1914, one of its prime movers was the late Dwight H. Perkins, a noted architect who lived on Lincoln Street, a block to the north.  The land was purchased and named in his honor.

Like all of the Forest Preserve system, the woods were designed to preserve the land as it existed before the area was populated with houses. Inside that square block are native plants, including about 100 ash trees, some 48 of which have been attacked by the emerald ash borer that has afflicted the North Shore in recent years.

These trees have been tagged for removal.

Crisscrossing the woods are five-foot-wide paths that intersect in the middle. The paths enable people to walk through this oasis of serenity in this urban environment, and many of the neighbors who turned out for the meeting were eager to keep it unmolested by the modern world.

But Suffredin, who lives just a few blocks from the woods, said that a 10-foot-wide path is necessary for maintenance vehicles to access the park and clear out the diseased trees and for continued maintenance after that.

The paths have been in “terrible shape” for a number of years, he said, “and we finally have the resources to do something about it.”

Other problems have surfaced as well, he said, including the dumping of waste by contractors and landscapers, and evidence that people have been camping and partying in the woods.

The current paths, he said, are flanked by ruts carved out by the trucks. An official of the North Shore Mosquito Abatement District who was in attendance at the meeting said that the ruts hold rainwater that breeds mosquitoes that carry the West Nile virus.

The district considered a permeable surface, Suffredin said, but ruled it out as impractical in a wetland. An asphalt surface was also deemed unsatisfactory because it leeches harmful chemicals into the ground.

So they settled on concrete, he said, as the alternative with the least undesirable characteristics. He said it would be colored so as to blend into the forest aesthetically. 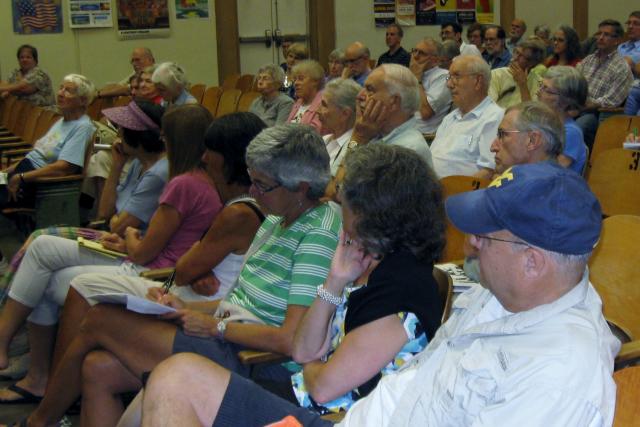 Concerned citiens raise questions about the aesthetics of proposed changes.

But many of the vocal citizens in the audience were not buying that. Concrete crumbles, they said, and would be difficult to maintain. And never mind the ruts, some audience members said.

“I do not want to see a highway going through a beautiful forest,” one attendee complained.

Sue Roberts, an avid bird-watcher, said there have been more than 102 species of birds spotted in the woods, many of them migrants that drop down to earth for a rest after flying over miles of open farmland on the way to their winter and summer homes.

Other wildlife spotted in the woods includes deer, raccoons, coyotes, and foxes.

Flanked by specialists from the Forest Preserve District, Suffredin and his colleagues parried each complaint, including a series of questions from an absentee neighbor, Libby Hill, that were presented by Roberts.

A citizen, who identified himself as a landscape architect, recommended that the district consider crushed gravel paths topped by mats. He insisted that culverts planned to be constructed beneath the concrete path for drainage purposes would quickly be rendered useless by an accumulation of debris and nesting wildlife.

Suffredin said he called the meeting to hear concerns and statements from the public about the district’s plans, but said “there is nothing I have heard tonight that would convince me to vote against it” when the commissioners meet Tuesday at 10 a.m. at the Chicago Botanic Garden to give the project a final okay.

“I want to be able to show this off to people across the country as a way to manage forests in an urban setting,” he declared.