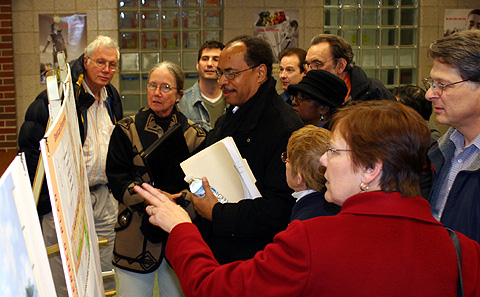 A city planning consultant showed off a draft plan for the Church-Dodge neighborhood Thursday night that calls for new retail and residential buildings at the intersection. 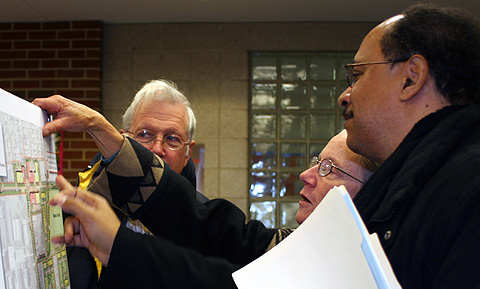 A city planning consultant showed off a draft plan for the Church-Dodge neighborhood Thursday night that calls for new retail and residential buildings at the intersection.

Based on a consultant’s conclusion that the neighborhood can probably support no more than 20,000 square feet of retail space, the plan calls for ground-floor retail only in the half block east and west of Dodge on the north side of Church and on land that’s now a parking lot at the southeast corner of the intersection.

It proposes two or three floors of residential units above the retail space.

The plan then calls for three-story, all-residential buildings on the rest of the Church Street frontage from Brown to Darrow Avenues, except for the Evanston Township High School property on the southwest side of the intersection at Dodge.

Earlier plans have called for ground-floor retail uses throughout this area, and the lack of retail in the recentlly rejected Darrow Corners affordable housing project was among the arguments opponents used against it.

A resident points to one of the clusters of townhouses proposed along the former railroad right-of-way.

The new plan also calls for removing the berm that once carried the Mayfair railroad tracks that cut diagonally through the area and building a pedestrian and bicycle path along the route with new townhouses on either side of the renewed green space.

About 70 residents attended the meeting at ETHS’s Bacon Cafeteria. Some objected to the proposed townhouses south of Davis Street, saying that property was publicly owned parkland which should be maintained as greenspace. But other persons present said the land affected is actually privately owned.

No objections were heard to the proposal to turn the storage yard owned by Veolia Environmental Services, formerly Onyx Waste Services, into a townhouse site.

Proposed streetscape in front of ETHS.
The plan also proposes adding a center median to Dodge Avenue in front of Evanston Township High School and one or more pull-out area for vehicle loading and unloading on the school grounds.

Neighborhood activist Betty Sue Ester, and some other neighbors objected to the median strip, saying it would create snow removal and littering problems.

But Brad Winick of JJR LLC, the city’s planning consultant, said it could help reduce accidents at the high school and better channel pedestrian traffic flow.

Some residents suggested the plan, which calls for construction of 188 new housing units, would lead to gentrification. But the planners said that because the proposal calls for multi-family buildings rather than single family homes, it would be relatively affordable for new construction.

The plan also does not propose any changes to the existing housing stock in the currently residential areas surrounding the commercial district at the Church-Dodge intersection.

Aside from the streetscape changes, implementation of the rest of the plan would be dependent on proposals from private owners to redevelop the properties involved.

Farr Associates, the consulting firm developing a proposal for the area north of Church to Simpson along the Mayfair right-of-way is scheduled to hold another community meeting on its proposal Oct. 25.

Then both consultants will present their ideas to the city’s Plan Commission Nov. 8.

City officials hope to have final City Council approval of the reports in time for the scheduled expiration of a building permit moratorium in the district in December.