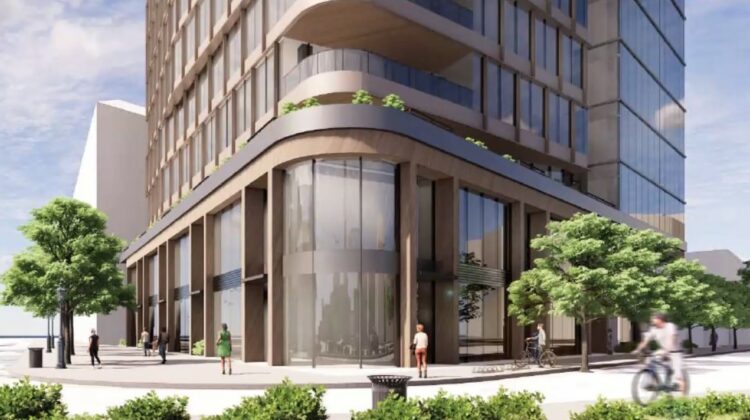 A rendering of he proposed 1740 Orrington Ave. building, looking southwest from the corner of Orrington and Clark.

In what may be a first for Evanston, neighbors at a community meeting Tuesday night did not appear to object to the height of a proposed new high-rise building.

But they did raise familiar concerns about parking, whether there is demand for the building and whether the developers might sell it to Northwestern University, leading to the removal of the property from the tax rolls.

The 11-story building is planned to have an open amenity space on its top floor, and several residents said they’d like to see that space — which is expected to have spectacular views of Lake Michigan and the Northwestern University campus — made available for public access.

Johnny Carlson, a principal with the developer, the Trammell Crow Company, said security requirements for the building’s office tenants would make it very difficult to have the roof-top space available to the public other than for occasional one-off events.

Carlson asked during the virtual meeting if residents would be OK with adding another couple of floors to the building if that created a layout that would resolve the rooftop access security issues. He didn’t get any takers for that trade-off, but resident Mary Rosinski said she wasn’t too concerned about the height as proposed, and Roger Roman said he wasn’t bothered by the proposed height.

Despite that, Ald. Clare Kelly (1st) who hosted the meeting, said she’d previously heard “a lot of concerns” about the building’s height.

The building would replace a vacant one-story Burger King restaurant and an adjacent three-story apartment building.

The proposed building would be 146.5 feet tall and is just north of the 106-foot-tall Orrington Hotel.

Some of the proposed design elements of the building drew praise from residents, but some, including Carole Bass, voiced concerns about the relatively flat west face of the building.

“That’s the side people will see coming down Elgin Road” into downtown Evanston, Bass said, “and many of us who live in tall buildings downtown will see it every day out our windows.

Kelly suggested moving the elevator core to the south, alley side of the building, facing the Orrington Hotel.

Carlson said the building is designed to provide state-of-the-art lab space for emerging life science companies. He said Trammell Crow has a similar building under construction in downtown Chicago and is convinced that there will be high demand for the planned building in Evanston.

The building is planned to have 35 underground parking spaces and Carlson said they plan to lease about 100 additional spaces from the city in downtown parking garages. He said the building is likely to create only half the parking demand of a typical office building, because the lab spaces end up having only about half as many employees in a given amount of space.

Regarding the concerns about a possible sale to the university, Carlson said Trammell Crow has no intent to sell to the university, that it’s planned as a multi-tenant building, with each of the tenants paying taxes, but that to have a provision barring a sale would make it difficult to finance the project.