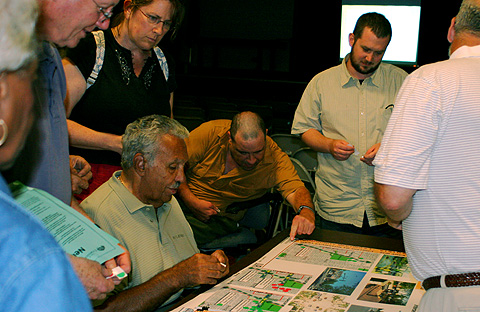 About 50 west-side residents gathered for a planning meeting Thursday night were nearly unanimous on one goal — getting rid of the Onyx waste transfer station along the old Mayfair railroad right-of-way. 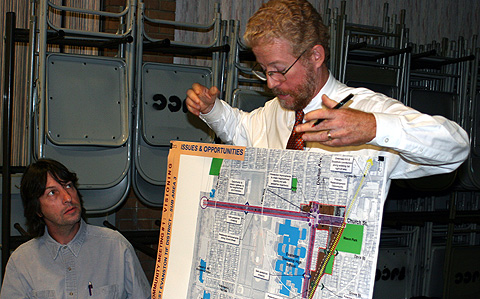 Neighbors said the Onyx property blights the area with its heavy truck traffic and the smell of garbage waiting to be hauled away as well as the debris that is carried by the wind onto neighboring properties.

Most speakers said the company should leave Evanston completely, although some suggested there might be appropriate industrial land for it in southwest Evanston off Oakton Street, and at least one person suggested the jobs the company provides could be a reason to keep it in town.

Residents also seemed to agree that the railroad right-of-way should be turned into a greenspace connecting parkland along the corridor. Most favored removing what’s left of the berm that elevated the tracks, although if that proved too expensive, there was some support for just cutting through the berm at intersecting streets to improve east-west connections through the area.

At the session held at the Fleetwood-Jourdain Center at 1655 Foster St., planners from city consultant JJR, LLC had neighbors gather around four tables and view sets of photos of different designs for residential and mixed use buildings and streetscape treatments.

Residents stick their stickers on a design board.

By the end of the meeting, the stickers suggested that the neighbors like low-rise attached townhouse, apartment and mixed use structures of three or possibly four stories with parking concealed behind or inside the buildings. Photos of five- and six-story buildings were judged too high-density for the area.

The photos did not show traditional detached single family homes, and some neighbors expressed concern about lighting and security issues when shown a closely-spaced detached townhouse design. 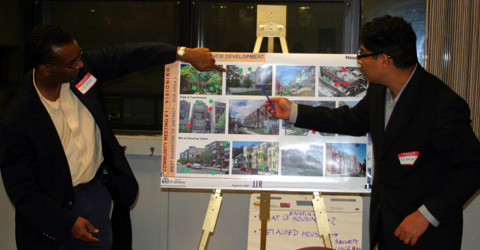 Consultants Kevin Campbell and Vishal Kundra point out building design features.
Planners said they didn’t show any examples of mid-rise or high-rise designs because in preliminary meetings with residents of the area they’d been told residents didn’t want the west side to have the density seen in new construction in downtown Evanston.

Residents favored most of the photos of street furniture they were shown — including bike racks and bus shelters in architectural bronze shades, but brought out the red dots for cheap-looking folk-art painted oil drums used as trash receptacles. 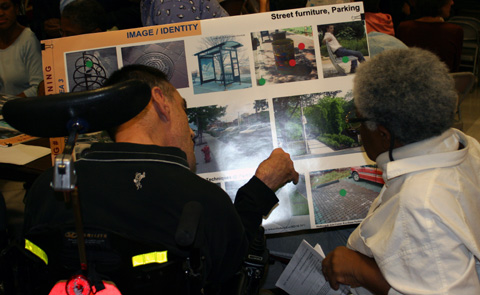 Residents ponder streetscape choices
They favored extensive green space along streetscapes, but some voiced concerns that the rights-of-way might not be wide enough to provide that.

The residents also seemed to like permeable paving surfaces that would reduce water runoff, but voiced concerns about snow removal and whether they would settle unevenly over time, creating access obstacles for the elderly and handicapped.

Thursday’s meeting focused on the Church Street corridor from McDaniel to Darrow avenues and the Dodge Avenue corridor from Church to Greenwood streets. 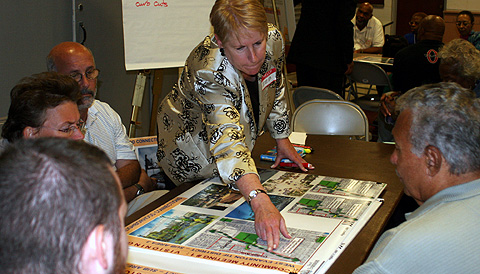 Residents who also attended a session the previous night dealing with the area bounded by Simpson Street, Jackson Avenue, Church Street and Darrow Avenue said the earlier session was much more acrimonious.

That session was hosted by a different city consulting firm, Farr Associates. Residents said that instead of sitting around tables discussing photo arrays, during the earlier session residents sitting in auditorium-style seating were given printouts with each page showing two photos — and asked to rate which one they liked better.

The observers said city officials also seemed to do a better job at the start of the second meeting explaining the goals of the planning process.

The next community planning meetings are scheduled for Sept. 13 for the area bounded by Simpson, Jackson, Church and Darrow and for Sept. 21 for the Church-Dodge corridor.