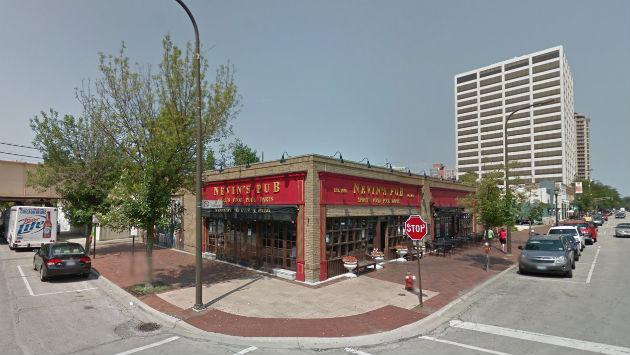 Carrella said the ownership group and the developer have had productive conversations about the sale of the property, recognizing more density is needed in the downtown district. They’re also exploring options to either open a new restaurant as part of the Albion project or at another location in Evanston.

Nevin’s opened at 1454 Sherman Ave. in 1990, and sources say the building had been quietly listed for sale for some time.

“We are not leaving Evanston anytime soon,” said Carrella. “Our company has a great reputation and tradition in Evanston, and we want to continue that tradition for many years to come.”

As first reported by Evanston Now on April 7, Albion is proposing a 16-story, mixed-use development with 10,000 square feet of commercial space on the ground floor that would include at least one restaurant. It would occupy most of west side of Sherman Avenue between Lake and Grove, except for the existing building at the north end of the block.

“We want to make sure the community knows we’re working with Tommy Nevin’s and welcome them back to our mixed-use development if it makes sense for them or will help them search within Evanston if they decide to look elsewhere,” said Andrew Yule, Albion’s vice president of development.

“Either way, we’re happy to work with Tommy Nevin’s to make sure it remains part of Evanston for a long time,” he said.

Carrella explained Tommy Nevin’s would relocate during the construction. “We have a plan in the works to open a new beer-focused concept in downtown Evanston in the very near future,” he said.

Albion filed a Zoning Analysis with the City of Evanston early this month to begin the formal review for the project, a process expected to take several months.

Nevin’s plans to remain open during that time. More information about the plans will be available on the Tommy Nevin’s website.

On Monday, Robert Strom, the owner of another major restaurant within the footprint of the project, Prairie Moon, said he also plans to stay in Evanston, potentially with a new Prairie Moon in the new building.