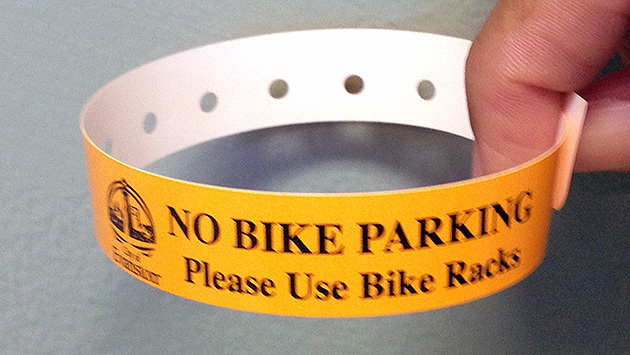 You're looking at Evanston's latest weapon in its love-hate relationship with bicycles.

It's a plastic band, a little like the ones hospitals wrap around the wrists of patients, and City Manager Wally Bobkiewicz says it will start showing up soon wrapped around the locks of bikes that aren't parked the way city officials like.

Of course, what the city code says is "No person shall park any bicycle in such a manner as to constitute a hazard to pedestrians, traffic or property."

Bobkiewicz, in an email message, said that "While attaching bikes to anything except a bike rack may not violate the law, we want to encourage use of bike racks where available."

While the city is installing protected bike lanes downtown to encourage more people to get out of their cars and ride, many cyclists complain that the city doesn't have enough bike racks and the ones it has often aren't conveniently located.

"We continue to place more bike rakes throughout business districts in Evanston," the city manager says. "What we have discovered is that some bicyclists do not want to bother with racks if they perceive a closer solution is available on a light pole or directional sign pole."

Bobkiewicz credits Public Works Director Suzette Robinson with coming up with the idea for the new yellow bands.