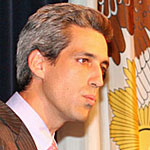 Several state lawmakers including Daniel Biss of Evanston today proposed what they called an innovative plan to end the bitter impasse over Illinois’ skyrocketing pension costs.

The new plan, introduced as House Bill 6258, is intended to bring pension costs under canontrol while providing retirement security for state workers and teachers.

The bill, introduced by Biss and State Rep. Elaine Nekritz, would

Biss and Nekritz say the new version demonstrates their commitment to seeing this issue no longer delayed but resolved in a meaningful way.

They’re calling for action before the current Legislature’s term ends on Jan. 9 and have included
ideas from various stakeholders in an effort to reach agreement.

“Daniel and I understand this is a difficult issue for all of us, and we do not approach it lightly,” Nekritz said in a news release.

Nekritz, D-Northbrook, is chairwoman of the House Personnel and Pensions Committee and a key pension negotiator.

“We have supported other reform legislation and would definitely consider other good ideas moving forward. But we must continue to push this issue forward and not let excuses get in the way of progress. Hopefully, this bill moves the conversation in the right direction because we must not let the pension problem ruin this great state.”

"The pension debate has featured too much finger-pointing and progress has been disappointingly slow," Biss said.

"At the same time, many stakeholders have offered constructive suggestions. This bill contains ideas drawn from business, labor, and civic groups as well as our colleagues in the General Assembly. We believe that it is a roadmap for solving this problem in January, and we stand ready to work with anyone to do so and build a better Illinois."

So far about 21 lawmakers have signed on as supporters or co-sponsors of the bill.