The new plans reduce from 56 to 50 the number of new, larger duplex units that would replace the 56 existing duplexes built in 1959 on the east side of the retirement community site.

The director of facilities management for Presbyterian Homes, Nancy Tolan, says the apartment building would be largely sheltered from view from neighboring private homes by the new cottages.

A rendering showing the four-story building behind a pair of duplexes.

Tolan said the plans shown today were developed as a result of a series of meetings held with neighbors since the first plan was unveiled in January.

She said a pair of duplex units at the southeast and northeast corners of the site that drew fire from neighbors have been eliminated from the plan, along with a third duplex on the inner circle road.

Another design change reduces the number of driveways to the units by siting some garages so they face the side of the unit rather than the front, letting two adjacent buildings share a driveway.

Tolan said the retirement community worked with neighbors to develop a landscaping plan that would preserve open areas on the site now are used as play spaces by neighborhood children.

She said the new plan also adds sidewalks around the perimeter of the property so that neighbors don’t have to walk or bicycle in the street to get to a nearby park.

She said the plan also increases underground parking to reduce congestion on the site.

She noted that couples now entering the development frequently now arrive with two cars — a change from when the existing project was designed.

"The clients we’re serving now are both out and about in the community," she said. 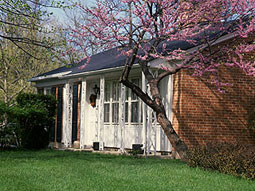 Tolan said she would look into that, but said that to many residents a car represents their independence and there "is big nervousness around giving up a car."

She said the organization is also looking at developing a shared vehicle program for employees who have to travel to different facilities operated by Presbyterian Homes during their work day.

Tolan said the new four-story building would be added to a cluster of buildings of similar height at the center of the campus and would be built of brick with limestone detailing.

The next step for the developer is to submit a planned development application to the city. That will be followed by hearings before the Plan Commission and a final decision by the City Council.

Tolan said Presbyterian Homes hopes to start construction on the new four-story building by Fall 2009. She estimated the construction cost for that building at about $19 million.

She said replacement of the cottage will likely take several years because they will be built a few units at a time as clusters of existing units become vacant.