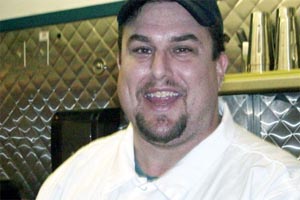 “As a kid in the 70s and 80s, my dad used to take me to hot dog places like Irving’s, Big Herm’s Hot Dog Palace and Mustard’s Last Stand,” says Eddie Lakin. “It was like a big weekend fun thing to do. So I set out to do something that would feel like a place that we would have gone back then.”

The result is Edzo’s Burger Shop, a new burger and hot dog restaurant that opened last week at 1571 Sherman Avenue. Hours are 11 a.m. to 4 p.m., every day except Monday.

Lakin is a professional chef who attended The Cooking and Hospitality Institute in Chicago. “After culinary school I was mostly in fine dining restaurants in Chicago, including Spruce and Tru,” says Lakin. His experience also included a year each in Barcelona and Bologna.

But after his children were born, he looked for something that wouldn’t take up 16 hours every day. That led him to Soprafinna, where he was general manager for three years.

“My last experience was a quick serve operation and I really liked the hands-on customer service aspect of it,” Lakin says. “I was the main contact person. I was on the register. I was running around in the front of the house helping people, as opposed to as a chef being in the back.”

After he was laid off, he started looking for a similar situation and decided to open his own place. 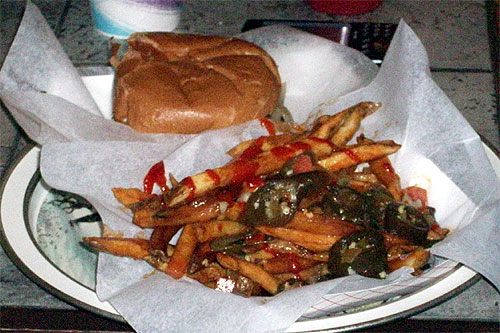 Doing it really well means fresh-cut French fries, hand-dipped corn dogs, and grinding his own beef every day. “The idea is, if you’re a fan of burgers, you’re going to eat this burger and say, ‘Wow, this is a great burger.'” Lakin adds, “The beef is noticeably better tasting when it’s freshly ground. You really notice it.”

Hot dogs, brats, and Polish are in the mix as well. “We’re going to do the traditional Chicago hot dog, which is a Vienna natural casing dog, so it has some snap to it when you bite into it,” he says, “with neon green relish, peppers, celery salt, and the normal stuff.” 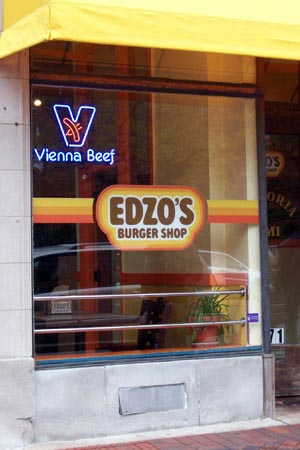 Are you going to give people a hard time if they want ketchup on their hot dog? “No. Life’s too hard,” he says. “I voluntarily put ketchup on my kids’ hot dogs three times a week. I’m not a purist.”

“I do Maxwell Street Polish. It’s a great tradition in Chicago food. You score it on both ends then put it in the deep fryer for 45 seconds. It curls all up and then you put it on the char grill and you get these crispy little bits. And eat it with mustard and grilled onion,” he explains. During a training session, the tasters “wanted fresh tomato and ketchup on their Polish. I don’t have energy to say no, you can’t do that.”

Lakin started work on the Fountain Square location in July, when Pita Pete’s closed. An experienced blogger and food critic, Lakin started documenting the process of developing his project online in January, from painting to setting up the griddle to city inspections to the Vienna Hot Dogs sign.

Lakin’s wife is his financial partner and his four-year-old son has been actively involved. “Henry is pretty excited about the whole thing,” Lakin says. “He likes his hot dogs.”

Lakin hired two cooks from Pita Pete’s who were highly recommended by Pete. During the few weeks before opening, Lakin has spent time testing recipes, training his cooks, and practicing everything from writing orders to cutting fries. He has invited friends and colleagues to several tastings. 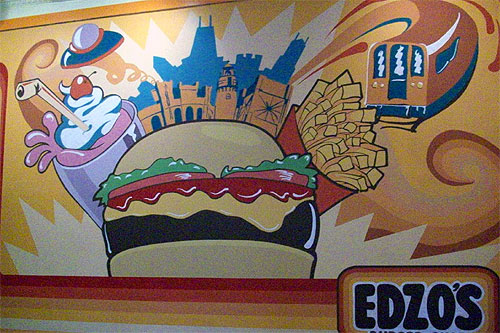 For Lakin, it’s all about the food. “I want people to be able to come in and get a burger, fries and a drink for $6,” Lakin says. “We’re still bringing some fine dining aspects. Grinding your own beef is a part of it. Just paying attention to each step of the process and make it as really good as you can.”