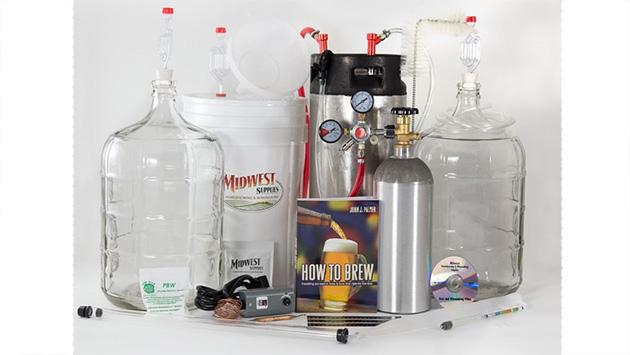 Richard Sandrok hopes to open a home-brewing and wine-making supply store in Evanston, although he isn't yet sure where in town he'd like to set up shop.

While exploring startup costs, Sandrok approached the board wondering whether a license would be necessary for his proposed business. Given there would likely be some sampling of home brews on the premises, Mayor Elizabeth Tisdahl said, "I would think a license would be appropriate."

City Attorney Grant Farrar said he would look into the issue and report back at the next board meeting. 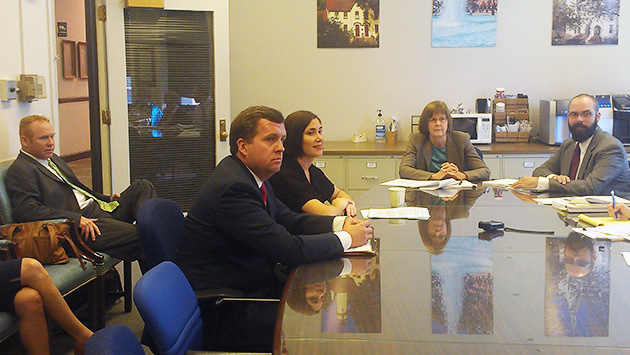 Top: A home brewing kit from an online catalog. Above: Jesse Opdycke and Walter Clements, left, and Richard Sandrok, right, at today's liquor board meeting.

Walter Clements and his business partner Jesse Opdycke were inspired by visits to Italy when they hatched a plan for their new business.

The two were especially enchanted by vino sfuso — made from grapes intended for blending and sold in bulk for everyday table wine, Clements said.

The idea, Clements said, is to sell a limited variety of vino sfuso by the liter in reusable containers and in a location that also offers coffee and cafe-style foods.

Selling wine in reusable containers provides a positive ecological benefit, Clements said, adding that transportation, bottling and processing account for the bulk of the cost of a bottle of wine.

Though onboard with the concept, board members had questions about the reusable containers and how they would be sealed for transport out of the premises.

"A permanent seal might be something that would make this fly," Tisdahl said.

Clements also suggested customers only be able to use bottles provided by his company.

The two businessmen were asked to further explore the issue and report back to Farrar with their findings and suggestions.